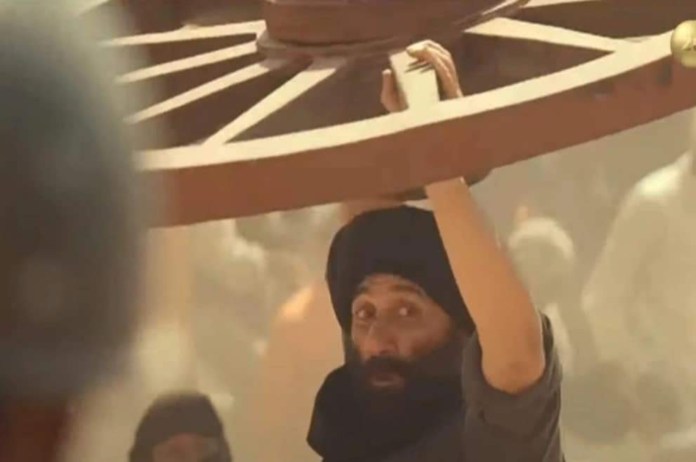 Gadar 2 First Look: This year, actors Sunny Deol and Ameesha Patel will team up once again for the sequel to Gadar. Although Sunny’s first appearance in the Anil Sharma-directed movie has yet to be seen, the teaser video has been released. It claims to bring Sunny Deol’s tough appearance from the 2001 movie back.

In a preview for upcoming movies, the Zee Studios mentioned Gadar 2. During an action scene, a tough-looking Sunny Deol wearing a turban uproots a cartwheel. It immediately calls to mind the prequel’s iconic scene in which he hoisted a handpump off the ground while battling the bad guys.

Because Sunny still has the same appearance as in Gadar 1, the audience might feel nostalgic. In the scenario from the 50-second video, he can be heard screaming as well. Sunny played Tara Singh in Gadar Ek Prem Katha.

Reacting to it, a fan wrote in the comment section. “Last glimpse of Gadar 2 Goosebumps.” “And there he comes Tara Singh in Pakistan full goosebumps,” added another one. Someone also predicted, “Gadar 2 will be a superhit and if it is as good as Gadar 1 it will be a Blockbuster.”

Anil Sharma’s Gadar Ek Prem Katha was one of the highest-grossing movies in Bollywood history at the time. It also featured Amrish Puri in a significant part in addition to Sunny Deol and Ameesha Patel. Over twenty years after the hit original, Gadar 2 will be released. The sequel was filmed in a variety of places, including Lucknow.

On the work front, Sunny will be seen with Ameesha Patel in Gadar 2 and Apne 2.