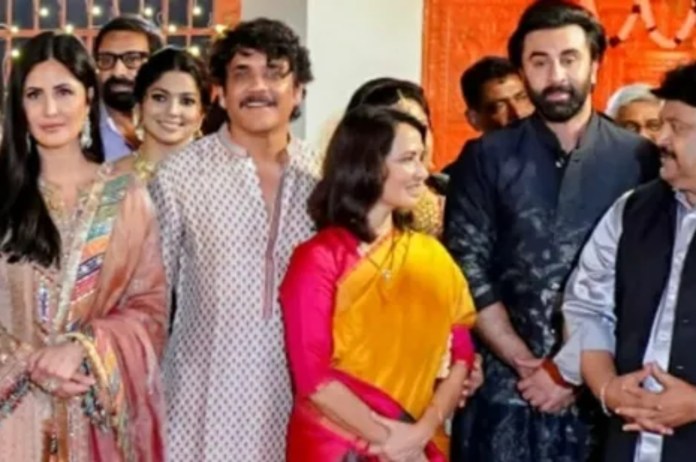 New Delhi: The Kalyanaraman family recently organised a Navratri feast at their home, which was attended by various Bollywood, Tamil, and Telugu cinema stars. Nagarjuna, R Madhavan, and Prithviraj Sukumaran were among the visitors. But what drew fans’ attention were exes Katrina Kaif and Ranbir Kapoor, who were both in attendance while keeping their distance, judging by the photos.

The Kalyanaraman family owns the well-known Kalyan Jewellers brand. Every year, they hold a star-studded Navratri puja, which is attended by a number of celebrities. Many movie stars were there this year as well. Ranbir and Katrina Kaif can be seen posing with the hosts, as well as other actors like Nagarjuna, in photos from the event provided by a paparazzi account. The two, on the other hand, were separated.

“Kat and RK in one frame,” wrote one netizen, while another mentioned,”My favourite couple”. One netizen requested them to work together in a film.

Regina Cassandra, Jayaram, and Arun Vijay were also present during the Kalyanaraman family feast. Arun and Ranbir posed for the camera in one photo. Another image shows one of the hostesses greeting Regina and Madhavan to the location. Katrina, who was dressed in a flowy suit, also posed with Nagarjuna, who was dressed in a patterned kurta with dhoti, and actor Jayaram.