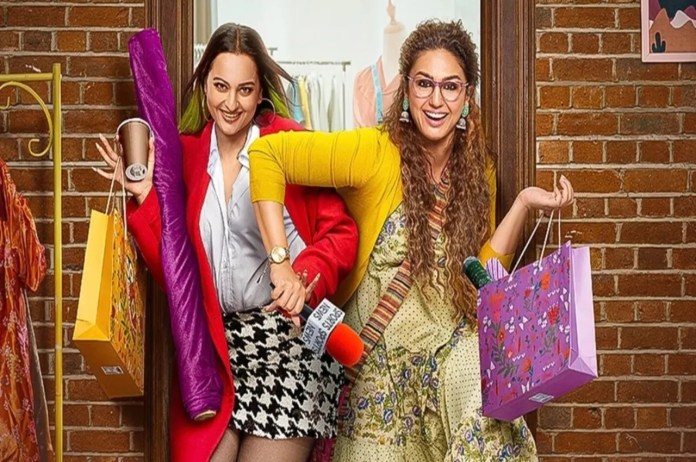 Double XL: There is good news for the fans waiting for the OTT release of Sonakshi Sinha and Huma Qureshi’s starrer film ‘Double XL’. Let’s tell that ‘Double XL’ has knocked on OTT, and on this platform, you can watch this movie.

Huma Qureshi is in the role of ‘Rajshree’ in the film. On the other hand, Sonakshi Sinha played the character of ‘Saira’. The extent to which plus-size women have to suffer body shaming will be seen in this film. However, it was clear from the trailer that an attempt has been made to show this serious issue in a very light-hearted manner so that people can laugh and understand.

Read More :-SALMAN KHAN WAVES AT FANS FROM HIS BALCONY, SAYS ”THANK YOU ALL…”

The film has been released on the OTT platform Netflix. You can enjoy the movie sitting at home for free. The information has been shared by Netflix on Wednesday. In the caption, they wrote, “Rajshri & Saira are coming to punch down on stereotypical beauty standards. Catch their tale of friendship and dreams on Double XL, streaming now only on Netflix.”

In the film, Sonakshi Sinha and Huma Qureshi are seen talking about body shaming happening to women in the world. If seen, body shaming is such an issue, which every woman has to fall victim to at some point in time. Whether it is due to excessive thinness or due to being fat, one has to suffer.

Now talking about the film, apart from Sonakshi and Huma, Zaheer Iqbal, Shikhar Dhawan and Mahat Raghavendra will also be seen in the film. The story of the film is based on dealing with the comments made on women’s bodies and weight. This comedy-drama film is directed by Satram Ramani.