HomeEntertainment'Donate Blood Instead,' Sonu Sood reacts as fan gifts painting made with... 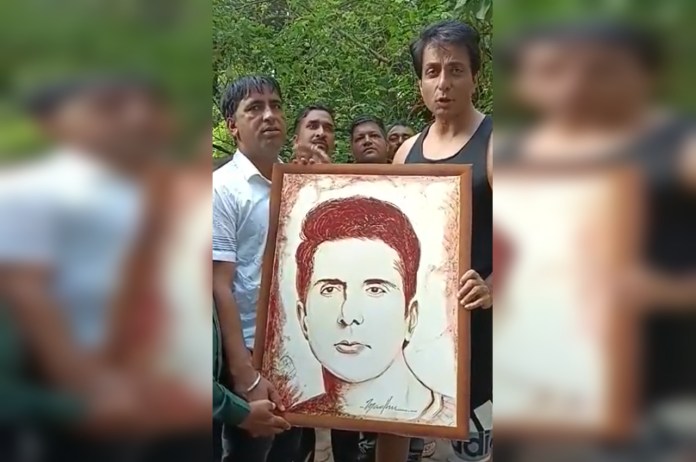 New Delhi: Bollywood actor Sonu Sood has appeared as God for the poor and needy people. Everyone appreciated his work during the Corona period. During the lockdown, he has send many people home by bus and provided them with food. His goodness has earned him a status above.

People from every state of the country are fans of Sonu Sood. But fans are fans. For them, their hero is God. One of his fans from Pratapgarh made a wonderful painting of Sonu Sood with his blood.

The actor shared the video of his meeting with the fan— artist Madhu Gurjar on his Twitter account and captioned it with, “Donate blood, my brother, not waste it by painting me. Many many gratitudes” (In Hindi).

In the clip, they both can be seen holding the painting together. Sonu said in the video, “He is a very talented artist. Bhai Sahab has created a painting of me, but…” At this moment, Sonu was interrupted by the fan who proudly added ‘with blood.’ Sonu said to him, “This is what you have done wrong that you made it with blood.”

One fan said to him, “I will sacrifice my life for you,” while another said, “You are no less than God.” A third one said, “We have never seen someone with as big a heart as you.”

In reply, Sonu said, “I understand, but why with blood. Donate blood instead.” He concluded the video by requesting the observers to help the artist and told the fan that his prayers are always with him.

Sonu last appeared in Akshay Kumar-starrer Prithviraj as Chand Bardai. Now, he will be next seen in the Tamil film Thamilarasan and the Bollywood film Fateh, an action thriller directed by Abhinandan Gupta.