New Delhi: Ace designer Manish Malhotra threw a grand Diwali party at his residence on Thursday night. The party was seen attended by the who’s who of Bollywood. From Aishwarya Rai Bachchan, Katrina Kaif, Vicky Kaushal to Karisma Kapoor, Madhuri Dixit, to name some glittered at the Diwali bash.

On Friday, Sara Ali Khan dropped a sneak peek from the last night’s party. She dazzled in golden as she posed along with Karan Johar and the host himself- Manish Malhotra. Sharing the picture on her Instagram story, she tagged both KJo and the ace designer. 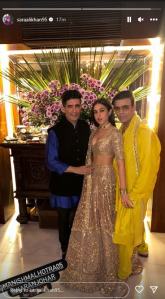 In the picture, Sara Ali Khan turned Modern Maharani in a sparkling voluminous lehenga designed by Manish malhotra. A matching blouse and heavy dupatta doubled up the blingtastic charm. A regal choker and flawless makeup completed her glorious Diwali look. On the other hand, Karan Johar looked stunner in a sunshine yellow kurta with pajamA. He also opted for a designer stole by designer duo Abu Jani Sandeep Khosla.

Manish Malhotra looked suave in a blue silk kurta with black churidar and a bandi jacket.

Meanwhile, among all the celebs, the duo which grabbed everyone’s eyes was  the new rumoured couple in town, Aditya and Ananya as they entered together. Before Manish’s party, the duo was seen at Kriti Sanon’s party together. After their last night’s appearance, fans have given their Jodi a cute nickname, Adiya.

On Friday, Karisma Kapoor took to her Instagram story and shared few pictures from the last night party. The one which stole our eyes was the one where Aishwarya, Karisma and Madhuri posed in all smiles.

Manish Malhotra has designed many designer clothes for any occasion held in Bollywood. He has also designed clothes for many movies and won several awards.