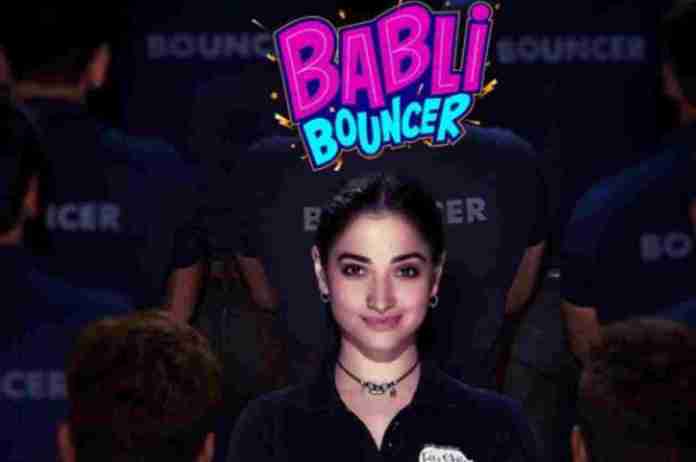 New Delhi: The trailer of Babli Bouncer featuring actor Tamannaah Bhatia in the titular role was dropped on Monday. The more than two-minute-long trailer, which followed Tamannaah’s transition from a bodybuilder in Fatehpur Beri to a bouncer at a Delhi nightclub, was shared by Disney+ Hotstar on its YouTube channel. “Asola Fatehpur ki yeh chhori, is here to do some ‘Bouncergiri’! Get ready to meet #BabliBouncer, trailer out now! #BabliBouncerOnHotstar streaming from Sept 23 in Hindi, Tamil and Telugu,” the post was captioned.

In the trailer, the Saurabh Shukla can be heard showering his daughter Tamannaah (Babli) who “can lift heavier weights than any other builder in the gym” while her mother is concerned about her not being able to make round chapatis. Tamannaah’s character in the trailer declines to wed Abhishek Bajaj’s character because she is more concerned with establishing a career in Delhi and becoming independent.

The Hindi, Tamil, and Telugu versions of Madhur Bhandarkar’s National Award-winning directorial will “BabliBouncer” premiere on Disney+ Hotstar on September 23, 2022.

Actress Tamannaah Bhatia, who plays a female bouncer, can be seen in the two and a half minute long trailer in a humorous and action-packed avatar.

Produced by Star Studios and Junglee Pictures, ‘Babli Bouncer’ is directed by Madhur Bhandarkar and stars Tamannaah Bhatia, in the lead along with Saurabh Shukla, Abhishek Bajaj and Sahil Vaid in pivotal roles.

Aside from Babli Bouncer, Tamannaah Bhatia also has ‘Gurtunda Seetakala’ in her pipeline which will hit theatres on the same day.