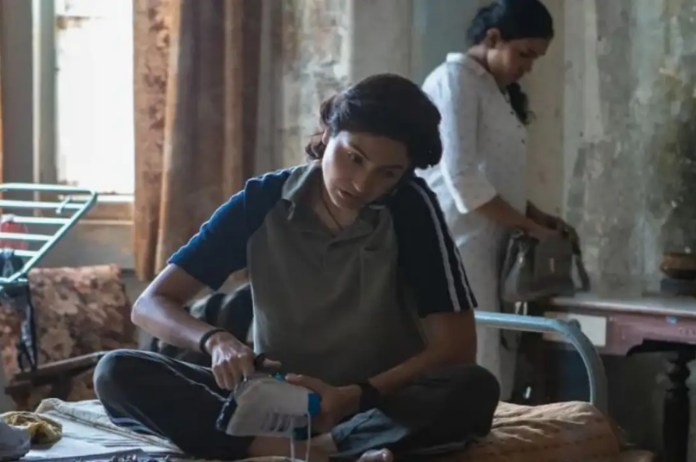 New Delhi: Bollywood actor Anushka Sharma is currently anticipating the release of her film Chakda Xpress. The film sees Anushka stepping into the shoes of former India Women Cricket Team Captain Jhulan Goswami. The actor is currently in the UK, giving final touches to her film. In between shoots, Anushka has been treating fans with the glimpses of her shoot life and some behind the scenes candid clicks. On Tuesday, the actor took to Instagram to share a picture from the sets of upcoming film.

Also Read :- Bedhadak: Shanaya Kapoor to begin shooting by the end of this year

Anushka Sharma, who underwent rigorous training for her role in Chakda ‘Xpress, frequently posts stills and glimpses of her character. Fans were thrilled when the actress recently shared yet another still from the movie on her Instagram. Anushka posted a photo of herself sitting on the bed, a shoe in one hand, and a sombre expression as she spoke on the phone. The image also shows another woman in the background and a glimpse of her room, which has paint peeling off the walls. Sharing the picture, Anushka Sharma wrote, “Getting into her shoes and recreating the journey! #ChakdaXpressOnNetflix #ComingSoon.” Check out the picture below.

Anushka had announced Chakda Xpress earlier this year. Sharing the teaser of the film, the actor wrote, “It is a really special film because it is essentially a story of tremendous sacrifice,” she wrote while sharing the teaser of the Netflix movie on Instagram. It shows her leading her team to a cricket field, wearing jerseys with slips of their own names slapped on the male cricketers’ names, as she makes a promise – “Today, you see us. Tomorrow, you’ll remember our names.”

Talking about the film, Anushka wrote in her post: “Chakda Xpress is inspired by the life and times of former Indian captain Jhulan Goswami and it will be an eye-opener into the world of women’s cricket. At a time when Jhulan decided to become a cricketer and make her country proud on the global stage, it was very tough for women to even think of playing the sport. This film is a dramatic retelling of several instances that shaped her life and also women’s cricket.”