Anushka Sharma shares emotional note for husband Virat Kohli, says ”You have brought so much joy on Diwali eve” 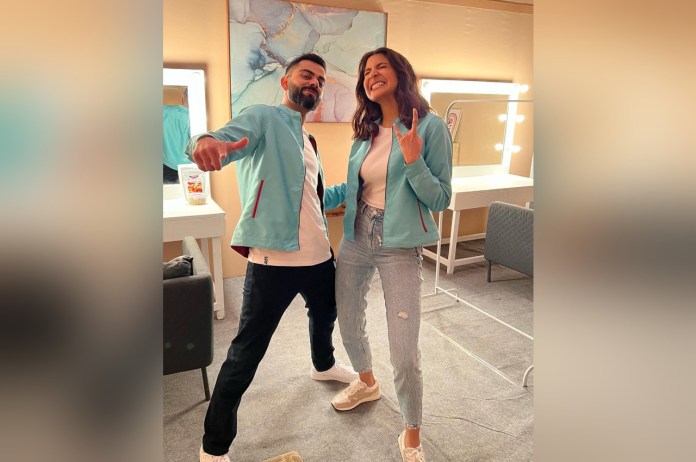 New Delhi: Bollywood actor and Indian star Virat Kohli’s wife Anushka Sharma shares an emotional note on social media, after today’s match. Virat Kohli gas silenced all the critics with his super knock against Pakistan in the Super 12 match of the ICC T20 World Cup 2022 at the MCG.

At the T20 World Cup on Sunday in front of a sizable Melbourne Cricket Ground audience, India defeated Pakistan by four wickets on the penultimate ball thanks to a brilliant half-century from Virat Kohli and a cool finish from Ravichandran Ashwin.

In his final over, Pakistan’s all-around spinner Mohammad Nawaz gave India two wides and a no-ball before Ashwin calmly smashed the winning run over mid-off as India successfully chased down 160 for victory. The game’s MVP, Virat Kohli, led India to the verge of victory with 82 runs remaining after pulling the team out of danger in an outstanding partnership with Hardik Pandya (40).

The Bollywood actor shared a series of photos of her husband Virat Kohli, who has been enjoying his victory at the stadium. While sharing the photos, she wrote a long heartwarming note.

It reads, “You beauty!! You freaking beauty!! You have brought sooooo much joy in peoples lives tonight and that too on the eve of Diwali!”

“You are a wonderful wonderful man my love. Your grit, determination and belief is mind boggling !! I have just watched the best match of my life I can say and although our daughter is too small to understand why her mother was dancing around and screaming wildly in the room, one day she will understand that her dad played his best innings that night which followed after a phase that was tough on him but he came out of it stronger and wiser than ever before! So proud of you !! Your strength is contagious and you my love, are LIMITLESS!! Love you forever and through thick and thin.” the post concludes.

Details about the match

In the penultimate over against Haris Rauf, Kohli smashed consecutive sixes, bringing India within 15 runs of winning with six balls remaining. Nawaz caught Pandya in close with a mistimed slog while Kohli was an off-strike to end their 113-run partnership.

The wheels came off for Nawaz, who then delivered a wide, and Kohli reclaimed the strike and smacked a six off a no-ball. The following ball banged off the stumps for three byes before Kohli was bowled off the free hit. Nawaz had Dinesh Karthik stumped with two balls remaining and two runs needed, but he bowled a wide on what would have been the final ball of the over. Ashwin finished the game calmly to secure the victory, throwing Indian supporters into a frenzy.

Virat Kohli was carried on the shoulders of Rohit Sharma as he went to the ground to celebrate India’s victory. After their 5-wicket triumph on Sunday in Melbourne, the former skipper was in tears and had a hard time controlling his emotions.