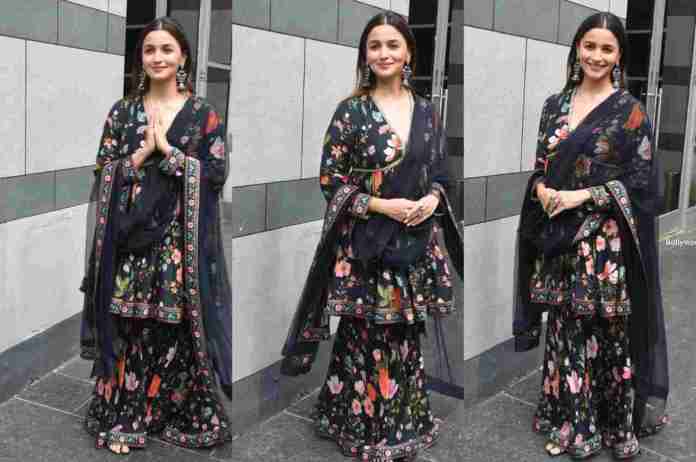 New Delhi: Alia Bhatt’s next film Darlings’ trailer premiered its trailer on Monday. The actress, who is expecting her first child with husband Ranbir Kapoor, wore a loose yellow dress to the trailer launch, successfully concealing her baby bump. Later, Alia changed into a black floral sharara, yet again hiding her baby bump.

Following the release of the trailer, a paparazzi account shared a video of Alia looking for a location to pose for photos. She walks around looking for the ideal lighting for photographs. She moves to another corner for more photos after posing near some greenery. And she keeps posing in her flared kurti and sharara, her dupatta and hands strategically placed in front. Needless to say, the actress looked stunning in the look, which she paired with a tiny bindi on her forehead and jhumkas.

Alia announced her pregnancy earlier this month. She and Ranbir married in April at his Mumbai home. Darlings, co-produced by Shah Rukh Khan’s Red Chillies Entertainment, marks Alia’s production debut. It is a dark comedy starring Shefali Shah, Vijay Varma, and Roshan Mathew that will be available on Netflix on August 5.

Earlier, Alia Bhatt made a stylish appearance at the trailer launch of her film Darlings in Mumbai. She was dressed in a yellow dress which she paired with a pink pair of heels. The Darlings trailer launch was hosted by actor Neha Dhupia. Before the event, Alia Bhatt shared her look with the caption, “It’s DARLINGS day ☀️. Trailer out very very very soooooooons 😬😬😬😬.” Check out her look below: