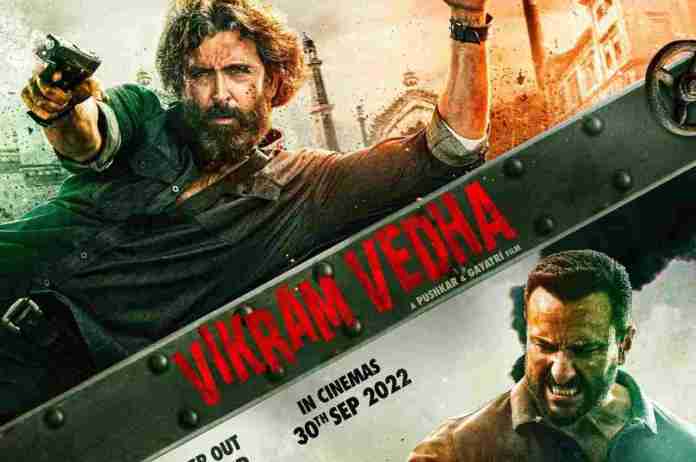 New Delhi: Hrithik Roshan and Saif Ali Khan’s Vikram Vedha is one of the most anticipated movies. The excitement for Pushkar and Gayatri’s film Vikram Vedha has been building ever since the teaser was released. Now as per a report from Bollywood Hungama, the makers of Vikram Vedha will be releasing its first song titled ‘Alcoholia’ on September 13.

A source told the portal, “As the film is quite anticipated and is the remake of R Madhavan and Vijay Sethupathi starrer, the next four week promotions would be in full swing. This will kick off with a trailer launch followed by the first song launch next week. Titled ‘Alcoholia’, the song will be unveiled on September 13, 2022.”

The movie is produced by YNOT Studios, Friday Filmworks, T-Series Films, and Reliance Entertainment. Vikram Vedha is all set to hit the theatres on September 20. The film is directed by the filmmaker duo of Pushkar and Gayatri, who directed the original, and are also helming the Hindi remake. It is a remake of R Madhavan and Vijay Sethupathi’s 2017 Tamil film of the same name.

Speaking about Hrithik and Saif’s characters, the former will play a ruthless gangster Vedha. On the other hand, Saif will play a determined police officer Vikram. The storyline of the film is based on the story of Vikram and Betaal.

The previews of Vikram Vedha have taken the excitement amongst the fans to newer levels.

The exclusive preview also featured customized messages from the lead cast for the fans in various cities.

Saif on the work front

Meanwhile on the work front, Saif will feature in Adipurush alongside Kriti Sanon, Sunny Singh, and Prabhas. The film will release on 12th January 2023. Hrithik will be seen sharing the screen with Deepika Padukone and Anil Kapoor in Fighter, which will be hitting the screens on September 28 next year.