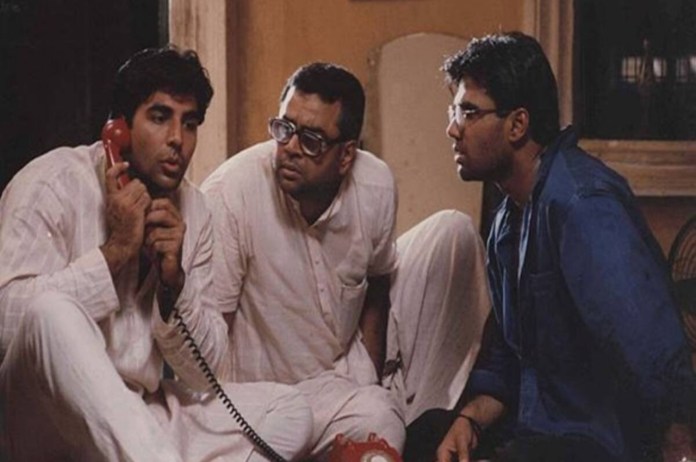 Taking to Suniel’s Instagram stories, he shared a video of them from their young days. He wrote the wish in the tone of their other co-star Paresh Rawal, who portrayed the role of Baburao in Hera Pheri. “Hey Rajuuuuu! Happy birthday re baba. @akshaykumar have a great one,” he wrote. 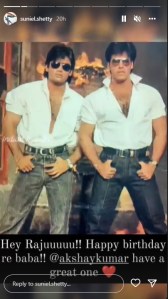 Birthday boy Akshay replied to him on his Instagram Stories, “Shyam bhai, thank you for the wishes. Phir thodi hera pheri kar le?” along with a heart and laughing emoji. 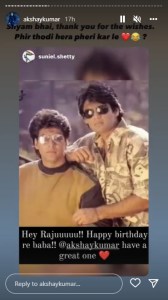 After seeing Akshay’s post, netizens started wondering if the actor has dropped a hint for the much-awaited Hera Pheri sequel on his birthday. There have been reports from the last few years that the third instalment of the film will go on floors but a confirmation is still awaited.

The 2000 Hera Pheri is one of the best comedy films in Bollywood. Helmed by Priyadarshan. Apart from Akshay Kumar, Suniel Shetty and Paresh Rawal, It also starred Tabu, Asrani, Om Puri and Kulbhushan Kharbanda. In 2006, the trio of Akshay’s Raju, Suniel’s Shyam and Paresh’s Baburao was returned with Phir Hera Pheri, which stars Bipasha Basu, Rimi Sen, Johnny Lever and Rajpal Yadav.

Akshay Kumar was recently seen in the OTT film, Cuttputlli, in which he played the role of a cop who solves a murder mystery. Now, he will be seen in Ram Setu, which will release around Diwali this year.