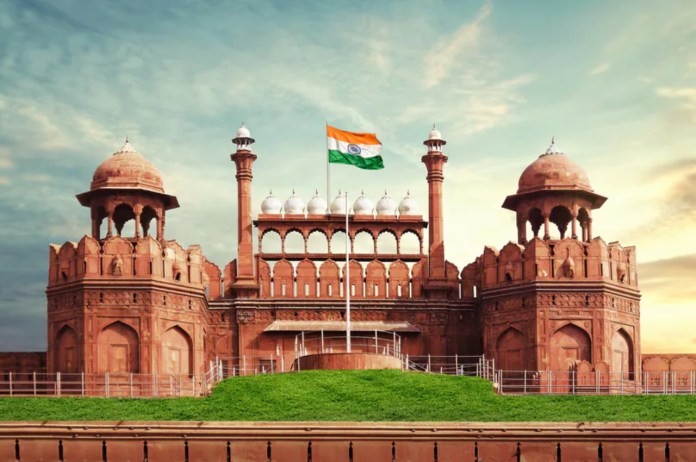 The biggest Gantantra Diwas ceremony takes place on January 26 in New Delhi, the nation’s capital, along the Rajpath or Kartavya Path. The Indian Army, Indian Navy, and Indian Air Force all take part in the grandiose parade that is held on this day every year. Anyone can visit the ceremony in Delhi to witness it in person or watch it live on television.

Also read:- Republic Day 2023: Why this day is celebrated on 26 January? read on

1. Which Republic Day is it this year?

India will commemorate its 74th Republic Day on January 26 this year. Since the Indian Constitution took effect on January 26, 1950, today is a holiday.

Abdel Fattah al-Sisi, the president of Egypt, will be the featured guest during this year’s Republic Day celebrations in January.

4. At what time does the Republic Day parade start?

The Republic Day parade will begin at 10 a.m. as scheduled.

The huge parade that marches down Rajpath in New Delhi on January 26 is practically associated with Republic Day celebrations in India. From Rashtrapati Bhawan, the parade marches down Rajpath to India Gate, then continues on the Red Fort. Its more than five-kilometer course begins with the president of India raising the country’s flag.

The government has suggested three specific themes for the tableaux of the 2023 Republic Day Parade: India@75, the International Year of Millets, and Nari Shakti, according to an official source.

Several state governments, central ministries, and departments, according to sources, have been invited to take part in the Republic Day Parade on January 26 by developing a tableau using one of these three themes, or a mix of the three.

The government has suggested that India@75 tableaux highlight India’s freedom struggle, its accomplishments, its deeds, and its commitment throughout the previous seven decades. This is in honour of India marking 75 years since its independence.

7. Where can I see Republic Day Parade?

All Doordarshan networks will carry commentary of the Republic Day parade.

8. When can I see Republic Day Parade?

As usual, the Republic Day procession will start at 9:30 am on Kartavya Path (Rajpath) in 2023. India@75, the International Year of Millets, and Nari Shakti are this year’s Republic Day Parade themes.

9. Where can I see Republic Day Parade in sign language?

The commentary on the Republic Day parade will be interpreted in sign language by DD News from the start to finish.

10. Can I see the Republic Day parade online?

From 9:00 am onwards, the Republic Day parade will be live-streamed on several social media sites.

11. Who hoisted the national flag on the first Republic Day?

With the ratification of the Constitution on January 26, 1950, India proclaimed itself a Sovereign, Democratic, and Republic state. The first President of India, Dr. Rajendra Prasad, saluted with 21 guns and raised the Indian flag, marking the official beginning of the Indian Republic.

12. Who takes the national salute on Republic Day?

The salute is returned by the Commander-in-Chief of the Indian Armed Forces, the President of India. The Republic Day parade features several contingents from various paramilitary forces in India as well as other civic forces.

13. When does the Republic Day celebration ends?

After formally declaring the conclusion of Republic Day celebrations, the Beating Retreat ritual is held. The third day after Republic Day, or January 29, in the evening, it is held. The bands from the three military branches, the Indian Army, Indian Navy, and Indian Air Force, perform it. At the end of Rajpath, near Raisina Hill and Vijay Chowk, the Rashtrapati Bhavan (President’s PalaceNorth )’s and South blocks, is where the event will take place.

14. Who was the chief guest at the first Republic Day event?

15. What is the difference between hoisting the flag on Independence Day and Republic Day?

Every year, on Independence Day and Republic Day, people celebrate it in a patriotic manner by taking part in various activities and decorating offices, public buildings, and schools with the tricolour.

But raising the flag on Independence Day vs raising it on Republic Day is a very different thing. The national flag is lowered and subsequently raised on Independence Day. The tricolour is then raised by the prime minister. The nation’s historic separation from British rule will be commemorated on this day. On Republic Day, however, the flag is raised without being pulled up and is fastened at the top. This suggests that the nation is independent already.

The Indian Constituent Assembly passed the Constitution on November 26, 1949, and it went into force on January 26, 1950 with a democratic style of government, completing the process of the nation’s transition to an independent republic.

One of the biggest contrasts is that the prime minister of India hoists the tricolour on Independence Day in place of the president, who is the constitutional head, because at the time of independence, the Indian Constitution was not in effect and neither had the president assumed office. However, on Republic Day, the president, who was the nation’s first citizen, is present and raises the flag.

16. When was the Indian national flag adopted?

17. Who designed the Indian national flag?

During a meeting of the All India Congress Committee in Vijaywada in 1921, Pingali Venkayya designed the Indian flag and gave it to Mahatma Gandhi. The flag at the time was made of the colours green and saffron, which stood for India’s Muslim and Hindu communities.

On the banks of the Ravi River, Nehru raised our country’s flag on December 31 of that year. He called for “Poorna Swaraj,” or total autonomy. The time was fixed. 26 January 1930

18. Was January 26 celebrated as Independence Day?

The Poorna Swaraj resolution or the Declaration of Independence was approved by Congress on that day. This was observed as Independence Day up until 1947.

On August 15, 1947, India attained independence. The day was chosen because it was two years ago on this day when Japan submitted to the Allies, bringing an end to World War II. When India’s Constitution was ratified on November 26, 1949, it felt like the best day to celebrate becoming a republic would be January 26. Thus, January 26 became our Republic Day in 1950.

In other words, even though India was still ruled by the British, it first observed independence on the day we commemorate becoming a republic.