Wife of Arvind Sangwan, who was martyred in the Sikkim accident, gives birth to son 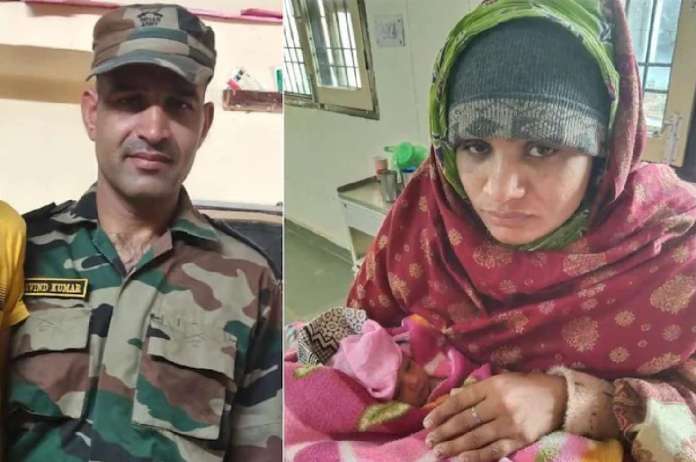 Gangtok: Army soldier Arvind Sangwan, a native of Jhojhu Kalan village in Haryana’s Charkhi Dadri district, recently died in a road accident in Sikkim. Within 10 days of Arvind’s martyrdom in the accident, the sound of a newborn has surround his home. The wife of Martyr Arvin has given birth to a son. Both the mother and the kid are stated to be perfectly healthy.

Pinky, Martyr Arvind’s wife, gave birth to a boy on Saturday, according to reports. Pinky, the martyr’s wife, is claimed to have given birth to a boy in the Jhojhu Community Health Center. Pinky and her newborn boy are fully healthy, according to Drs. Abhimanyu and Suman Sheoran at Jhojhu CHC.

The infant weighs three kilos, according to the doctors. Martyr’s father, Rajendra Sangwan, has stated that it will be our goal for both of Arvind’s kids to join the army and serve their nation. At the same time, Minister of State Anoop Dhanak visited the martyr’s home and offered condolences on Arvind’s sacrifice and congratulated the family on the birth of a son.

Anup Dhanak, Minister of State, stated that the country will be forever grateful for Arvind’s sacrifice. Pinky, the wife of Martyr Arvind Sangwan, is also a member of the Haryana Police. Pinky is assigned to Dadri’s women’s police station. Pinky and Arvind already had a kid. Dhruv Sangwan, Arvind’s eight-year-old son, lighted his heroic father’s funeral pyre.

On December 23, an army truck crashed down a steep gorge in Sikkim’s Gema region. 16 army men were killed in this tragedy, including Arvind Sangwan of Jhojhu Kalan village. On December 25, Martyr Arvind was cremated with full military honours.