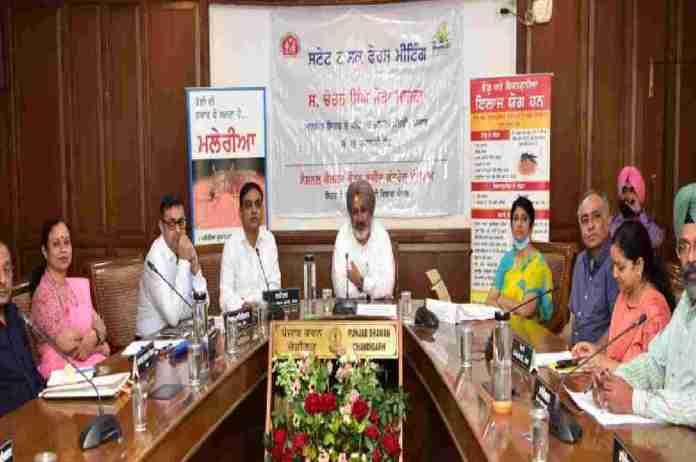 Chandigarh: To control the spread of the Vector Borne Diseases post heavy rainfall in Punjab, the STF meeting was held under the chair of the Punjab Health and Family Welfare Minister Chetan Singh Jauramajra.

The Health Minister reviewed the activities being carried out by various departments to deal with the growing threat of dengue and instructed the departments to make collaborated efforts to control dengue and malaria and chickengunya to safeguard the health of the people of the state.

He also directed the officers of Local bodies Department and Punjab State Rural Development to further strengthen the activities to be done to control dengue and malaria.

Divulging important information, Chetan Singh Jauramajra said that that Dengue is a notifiable disease in Punjab and the department has fixed the price of dengue test in private hospitals and laboratories at Rs. 600 across the state, so that people can avail this service at reasonable rates.

Regarding the preparedness of the Health department to combat dengue Jauramajra stated that 1274 dengue beds have been dedicated for dengue wards in the government hospitals for management of dengue cases.

42 Sentinel surveillance hospitals have been established for free dengue diagnosis in the State. He informed that 855 breeding checkers have been hired in all 23 districts for checking of larva of Aedes mosquito in urban as well as rural areas.

The health minister directed the Local bodies department to carry out fogging in the cities and towns at regular intervals. He further said that most of the dengue cases have been reported in 4 districts in the state and the situation is under control in the rest of the state.

Similarly, very few cases of malaria and chikungunya have been reported. He urged the people to not let water stagnate in their homes and around to prevent mosquito breeding.

Disclosing further, the minister said that a special awareness campaign involving children shall be started by education department. For this, special camps must be organized in the schools to educate them on preventive steps to ward off various vector borne diseases. He ordered the officials of the Health Department to involve NGOs in the awareness campaign.

The Health Minister directed the officers of the Water Supply and Sanitation Department to immediately rectify the malfunctioning water sewage system anywhere in the state. So that outbreaks of water borne diseases can be prevented.

On the occasion, the Secretary, Health and Family Welfare Ajoy Sharma apprised the Minister regarding the preventive measures concerning dengue and directed the officers of the department to mount a sustained campaign to combat dengue, malaria and Chikungunya besides constituting whatsapp Groups of the concerned Nodal Officers to keep track of the progress.

On this occasion a comprehensive presentation has been given by Programme officer, Dr. Arshdeep Kaur about these diseases, in which facts of recent years analysed thoroughly.