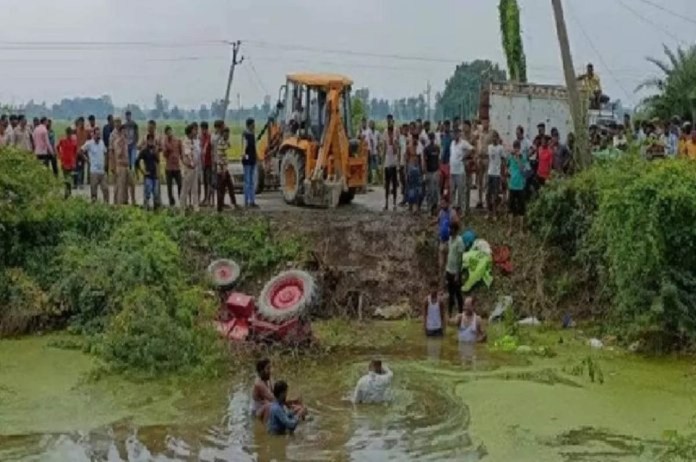 Lucknow: A major accident took place in Lucknow, Uttar Pradesh, on the first day of Navratri on Monday. An uncontrollable tractor-trolley, with 50 people on-board, fell into the pond about 30 km from the city.

Five people have died in the accident on spot, while about 45 people are seriously injured. All the injured have been admitted to the hospital and the rescue operation is going on at the site of the accident.

Everyone was going to Mundan ceremony of the child

According to the information, the incident happened at 10 am when relatives along with Chunnan – father of the child – a resident of Sitapur district, were going to Unai Devi temple in Itaunja in a tractor-trolley.

It is being said that the tractor-trolley, which was at a very high speed, became uncontrollable and fell directly into the roadside pond.

About 50 people were said to be in the tractor and trolley when the accident happened.

After the accident, neighbors reached the spot and informed the police about the matter.

The police, upon receiving information, immediately started relief and rescue operations on the spot.

According to the local police, all the people were pulled out of the pond. Five of whom have died, while 45 people are seriously injured. All injured have been admitted to the hospital.

Expressing grief over the accident, Uttar Pradesh Chief Minister instructed DM and SSP to reach the spot immediately and expedited the relief and rescue operations. The CM also instructed for the better treatment of the injured.