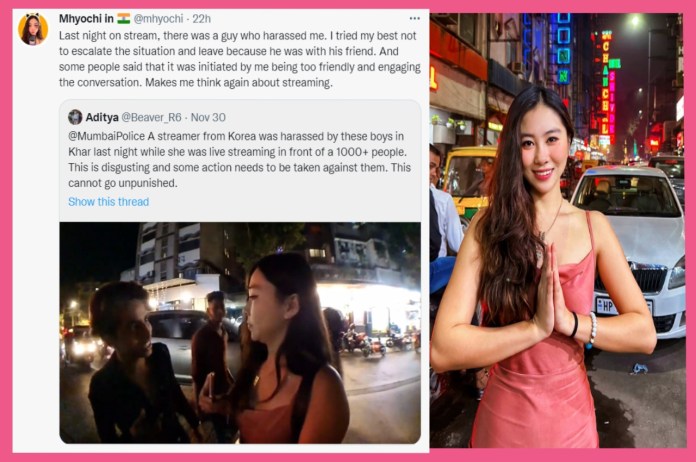 Mumbai: A female Youtuber from Korea who was live streaming from Mumbai streets was harrassed by two men. Meanwhile, the victim said that many people blamed only her for “being friendly.”

“…On stream, there was a guy who harassed me. I tried my best not to escalate the situation and leave because he was with his friend. And some people said that it was initiated by me being too friendly and engaging the conversation. Makes me think again about streaming.”

In a viral video, one of the Indian men was seen dragging the woman by her arm and forcing her to sit on his bike. The girl refuses to do so as she said she is not wearing appropriate dress to travel. The accused did not stop despite the victim saying “no”.

The woman started to walk away but this time, the accused who was accompanied by another man, followed her.

The rwo were forcing the girl to sit with them on bike so they can drop her wherever they want. Even after constantly resisting them, the guys kept on trying to convince her.

However, the Police has arrested the two on grounds of the video.

The victim did not file any complained but the video went terribly viral on the internet, attracting attention of cops.