Severe criticism of the CM's failure to protect BJP workers exposes the fault lines within the BJP, where many “outsiders” had to be accommodated at the cost of long-serving party MLAs. 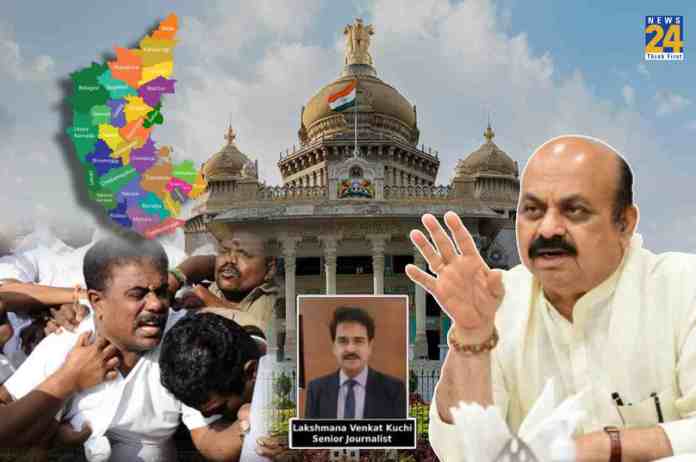 Under attack from angry party cadres for his alleged failure to protect party workers, Karnataka Chief Minister BS Bommai cancelled the first anniversary celebrations of his government and tried to placate them with the declaration to raise a separate anti-terrorist force in the state.

The Chief Minister was forced to cancel the celebrations after the chief guest for the function, BJP president JP Nadda, decided to stay away following vociferous protests by party cadres and right-wing groups over the brutal hacking of BJP Yuva Morcha activist Praveen Nettaru in Bellare in Dakshin Kannada.

Angry party cadres and sympathizers t drove away state BJP president Nalin Kumar Kateel and his companions from Nettaru village on Wednesday when they visited to pay their last respects to the slain BJP activist.

The mob surrounded the vehicle in which they were travelling and tried to topple it. Sensing danger, the BJP president was taken away in another vehicle. Many party activists also sent in their resignations in protest.

Adding to the pressure from cadres was the attack from the supporters of former Chief Minister BS Yediyurappa. Severe criticism of his failure to protect BJP workers exposes the fault lines within the BJP, where many “outsiders” had to be accommodated at the cost of long-serving party MLAs.

Incidentally, union minister of state for agriculture and farmers’ welfare, Shobha Karandalje considered a close confidante of Yediyurappa has already sought an NIA investigation into the ghastly killing of the youth activist, which is suspected to be linked to the killing of a tailor Kanhaiya Lal in Rajasthan for his support to former BJP spokesperson Nupur Sharma.

BJP national secretary and MLA CT Ravi is firm that the ghastly murder was part of a well-planned conspiracy to disturb communal harmony in the state and suspects the involvement of Left oriented and Islamic groups like PFI and SDPI operating from across the borders.

For Bommai, a damning indictment comes from right-wing leader, Sriram Sena chief Pramod Muthalik, who commented, “The government has no guts or courage to squarely face the challenge. If this government does not act decisively, there will be more deaths. The state government is failing in this matter.” Muthalik is only reflecting the sentiments of the right-wing groups that are aghast the with a double engine government and its failure.

Kozhikode: The Kerala Court on Wednesday ruled that Section 354 A of the Indian...
Auto

New Delhi: Anurag Thakur, the minister of information and broadcasting, announced on August 17...

Kozhikode: The Kerala Court on Wednesday ruled that Section 354 A of the Indian...
Auto