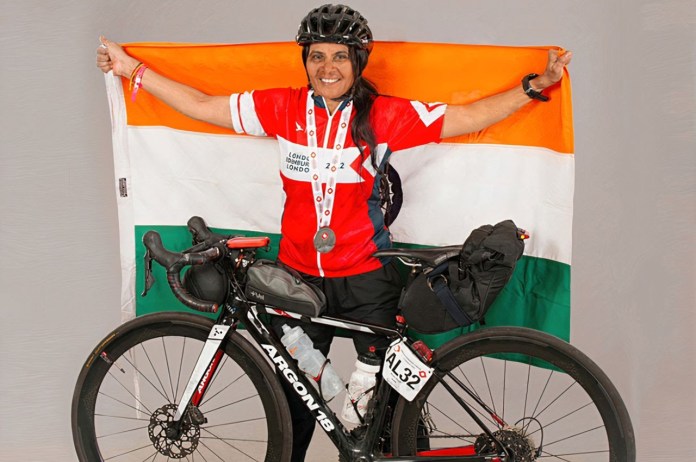 Jaipur: At an age when most of athletes and sportspersons hang up their boots and lead a retired life basking in the glory of their yesteryears’ achievements, a 57-year-old woman cyclist from Jaipur, Renu Singhi, is proving her mettle in cycling not only in India but in the world by defying her age and breaking the stereotype Indian mentality about women.

Rightly and fondly called “Iron Lady” by her friends, colleagues and acquaintances, Renu Singhi recently achieved the distinction of being the only woman participant from India to clock the 1550 km target of international cycling ride ‘London-Edinburgh-London (LEL) 2022’ much ahead of the stipulated time frame. A grandmother of two children, Renu Singhi has achieved that feat in cycling, which even most of the youngsters find it difficult to dream, leave alone the people past 50 years of their age. Due to her enthusiasm, passion and tremendous towards cycling, she is popularly known as Iron Lady and she is living up to her reputation by proving her mettle in cycling. 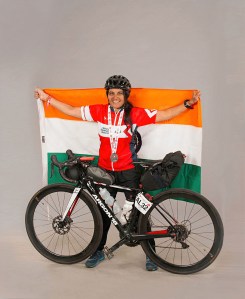 Her recent feat “London-Edinburgh-London” is counted among the most challenging self-supported cycle rides in the world. In this, a participant has to gain an elevation of about 14,300 meters, which is much higher than the height of Mount Everest. This is a test of the participants’ patience. In this ride, about 1900 cyclists from all over the world were to travel 1550 kilometers from London to Edinburgh (the capital of Scotland), to reach back to London. This was to be completed in 128 hours. Renu Singhi brought laurels for the country by clocking this ride in 124 hours and 32 minutes with her iron will and determination. This is the best proof of her mental and physical fitness.

Earlier in 2018, Renu Singhi qualified for the cycling endurance ride ‘Paris Brest Paris (PBP) 2019’ held in France. After that she never looked back. She stood first in the 1220 km elite category in the Cyclotrots Freedom Challenge before PBP. Nine participants from Rajasthan participated in the self-supported endurance ride- Paris Brest Paris in August-19, in which Renu Singhi was the only finisher of the 1220 km task. She achieved this target in 92 hours.

Renu Singhi, who has cycled more than 55,000 kilometers so far, said, “About six years ago, I had bought a cycle for the purpose of fitness, because I could not find time to go to the gym daily. After this, I joined the Jaipur Cycling Community (JCC). Going to Nahargarh early in the morning with JCC members and then routine rides around cities boosted my confidence.”

Along with this, she started participating in cycling events. She has achieved the status of Super Randonneuer (SR) five times by completing a Super Series of 600 km (100km, 200 km & 300 km) in a calendar year. 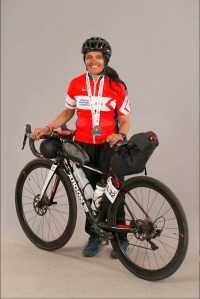 She completed 1500 km Super Randonneuer (SR) series organized by Hawk Rider, Jalandhar in February-21. In October-21, as the only woman cyclist from Rajasthan, cycling 420 km from Srinagar to Leh. It, despite being in a hilly area, could not deter her determination and courage. After Leh, she also cycled up to Khardung la, located at an altitude of 18,000 feet above sea level, where the oxygen level was very low. Besides, Renu Singhi has cycled 1200 km in ‘Tour de Rajasthan’ and 1460 km from Delhi to Mumbai in six days under G2G Ride. She has also topped the women’s category by cycling 1785 km and running 426 km in the national event organized by the Kota Cycling Community.

Currently working as the advisor of Poornima University (PU), Jaipur, Renu Singhi, has become a role model for people of all age groups. She has proved that age is just a number and no goal is difficult if there is a strong determination and commitment, and age can never become a hindrance in achieving it. Her husband Shashikant Singhi is a businessman and they have two sons. She is also the grandmother of two children.