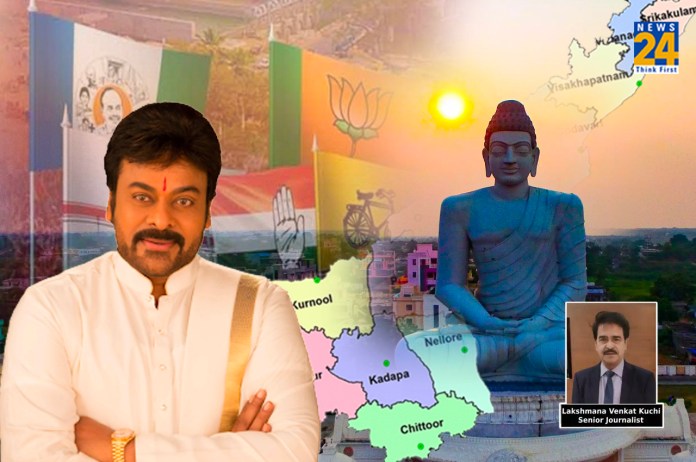 In film-crazed Andhra Pradesh, talk once more centres around the re-entry of megastar Chiranjeevi, who is as big as Amitabh Bacchan and Rajinikanth in the Telugu film world and extremely popular in the two Telugu-speaking states of Andhra Pradesh and Telangana.

In 2008, Chiranjeevi entered politics and launched a political party, Praja Rajyam Party (PRP) and fought assembly elections as a third force – but could do nothing but win 18 out of the 294 assembly seats in the combined Andhra Pradesh. But what his presence did to the complexion of the elections was that it ensured the victory and re-election of  Congress Chief Minister YS Rajashekhar Reddy as Chiranjeevi cut into anti-Congress votes and helped Congress win.

In fact, it was an open secret in those days that Chiranjeevi’s political role was scripted and directed by YSR which events later proved. After winning a mere 18 seats, and even losing in one of the two seats contested by Chiranjeevi, the mega star merged his party with the Congress and was even rewarded with a cabinet berth at the central government headed by Dr Manmohan Singh.

After Congress rout in the 2014, Chiranjeevi faded away from political scene in Andhra Pradesh, where his younger brother and also a film star – Pawan Kalyan launched a party of his own called Jana Sena and is seen hobnobbing with BJP at one level and even Telugu Desam Party now and then.

Which is why, the talk on Chiranjeevi’s political plans becomes more interesting in Andhra Pradesh, that is now being ruled by YSR’s son Jagan Mohan Reddy who has got an iron grip over the state and dominates the state politics. It goes for polls along with 2024 Lok Sabha general elections and sends a sizeable chunk of 25 Lok Sabha seats. So far, in parliament, YSRCP supports the NDA government, but inside Andhra Pradesh the regional party does not approve of an expansionist BJP.

Now, erstwhile Chiranjeevi party PRP members – now in different political parties – congregated at the temple town of Tirupati and made a demand to their superstar and political guru Chiranjeevi to return to politics. The film star himself has been coming out with dialogues that can be construed as hints to join active politics once again.

In fact, says his former party colleagues and sources close to him that “his blessings are always with younger brother and his political party, Jana Sena. The Jana Sena was born out of PRP and has been totally inspired from the life and times of elder brother Chiranjeevi is the belief of his supporters, who are now looking to Chiranjeevi play a role in active politics.

The film star himself remains content with sending out coded signals that can be interpreted as his intent to play active politics. “I may be out of politics, but you cannot remove politics out of me,” Chiranjeevi said addressing a congregation of his supporters from the political field recently that has been welcomed and interpreted by his supports as his clear signal of entering political fray once again.