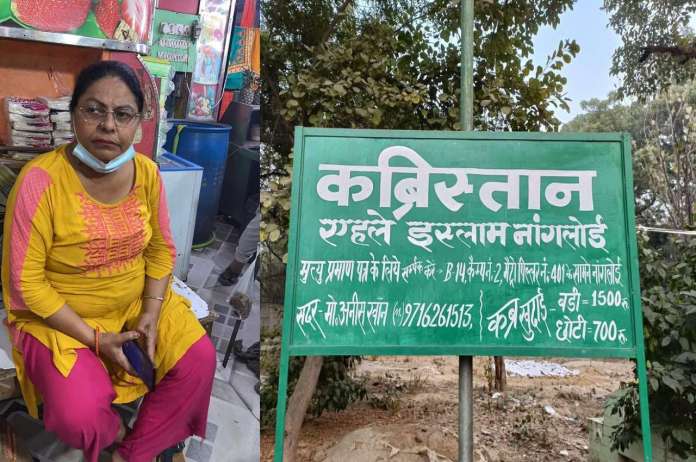 Delhi Mangolpuri Murder: A 54-year-old Hindu woman was murdered in Delhi and her body was buried in a Muslim cemetery. On Wednesday, police extracted the woman’s remains from the cemetery. The woman’s number is Meena. According to the police, she was murdered. The woman lived at Mangolpuri’s Avantika Enclave.

According to DCP Outer Harendra Singh, the woman went missing on the night of January 2nd. Her husband filed this report. During interrogation, it was revealed that the deceased Meena was a micro financier who used to lend money to street sellers in West Delhi on a daily basis. Her phone had been turned off.

Police investigated the neighbouring CCTV footage but discovered nothing. The police filed a kidnapping report in this case on January 7, since the family suspected Mobin.

The victim’s cell phone was tracked down by authorities throughout the investigation. The previous two callers received the same location. On this basis, the police apprehended Mobin first. He was questioned. The police had learned that Mobin and his friends had committed the murder, but the other accused were yet to be apprehended.

Meanwhile, Naveen, the second accused in the case, applied for bail in court. Simultaneously, he became involved in the police inquiry. The cops interrogated him thoroughly. He told the cops that he and Mobin had known Meena for around 4-5 years.

According to the cops, Meena gave Mobin the loan. He couldn’t give it back. Not only that, but he was requesting additional loans. Meena declined to provide the loan. As a result, the three of them plotted to murder him.

They claimed to have murdered her in Mobin’s room. Mobin lives in the Mangaram Park neighbourhood. Mobin then buried him in the Nangloi cemetery late on January 2nd. This murder also included a man named Rehan.

All three were apprehended by authorities, and the vehicle used in the incident was also retrieved. Further inquiry is underway. Mobin works as a taxi driver, Naveen as a tailor, and Rehan as a barber. The police are doing a post-mortem on the woman to determine whether she was raped or not.