Delhi: Discussion over transformation of IAS post at DAOAF 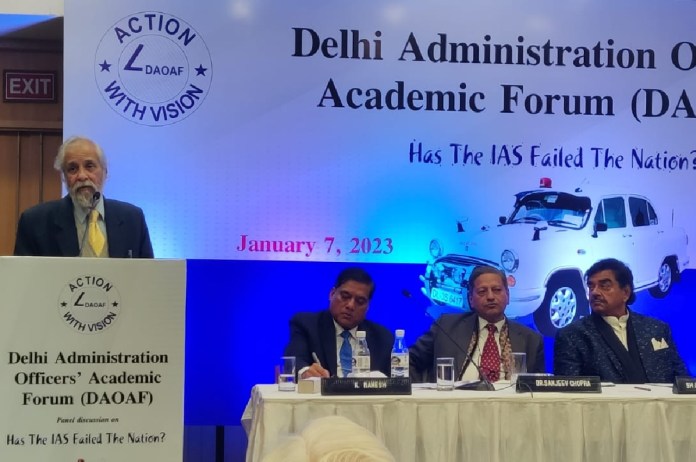 New Delhi: Has the steel frame of India got it rusted? Has the IAS failed the Nation? What are the reasons and how do we transform the IAS, the premier service of India was discussed in debated in India International Centre organised by the Delhi Administration Officers’ Academic Forum (DAOAF) a think tank of active civil servants of AGMUT cadre.

2. Mr K Mahesh IAS initiated the debate by saying that a need was felt to discuss and debate the topic ” Has the IAS failed the Nation?” When we have completed 75 years of independence.

The purpose is not to demolish the IAS which has done great service to the country, but how to transform the service in the wake of new challenges like corruption, issues of autonomy and accountability, Rule of Law and Social Justice and threats from within the service. These issues are important, alarming, and critical when Sardar Patel known as PATRON SAINT for protecting the civil servants from political involvement had guaranteed their terms and privileges.

3.Mr. K Mahesh, probed further and shared – The IAS officers find their autonomy restricted, being transferred from place to place, and are having to accede to pressure from the government. The challenges facing the IAS were well covered and documented by the Vohra committee even in 1993. Yet few actions were taken. We need to go back to the principles laid down by the patron saint of IAS – Shri Sardar Patel who promised autonomy to the IAS. We need to live up to the values and promises that the IAS should live up to.

4. Dr. Amarjeet Sinha, focused on the many successes and failures of IAS and services. There are many challenges that we face, yet he saw many positives, especially in the past two decades. He then mentioned about the critical role played by IAS in the amelioration of poverty in India, especially giving the example of south Indian states. And praised the young IAS officers who went beyond the call of duty and contributed to the betterment of people’s lives. IAS also needs to be credited for the economic reforms and the remarkable improvement that we have seen in education and health. We must recognize that the glass is half full. Mr. Sinha, also warned about the challenges we and the administrative services face. The culture of conformism is what is that IAS needs to wary about. He stressed on the need for having the freedom of mind and action. While being positive and hopeful about the nation and our development, he stressed on the need for recognition that IAS needs be a facilitator in the development, that is the role that they must live up to.

5. Mr. Shatrughan Sinha stressed on the focus for passion for the profession is what would matter. He went on to agree that though IAS have delivered and functioned well, yet there is a lot that could improve. He pressed for the need for some reforms to help improve the functioning of the IAS. Firstly, he mentioned that there is a need to increase the age limits for IAS needs to be increased and their services be used further. Second, that there is a need to have a period of cooling off before taking any political roles by the administrative officers and not be partisan to any group. Third, the services may have separate aptitude-based exams and more focus training for the different services from the beginning itself. Lastly, the unconstitutional and irregular transfers of officers through political interference needs to be addressed.

6. Dr. SY Quraishi, stressed that political leadership has not failed, and, we have had a great bureaucracy that has made our nation powerful, and we have come long way from 1947. He again mentioned that IAS is still critical and important to the nation building. Also pointed that there is also a debate on whether IAS is generalist but pointed on that IAS are specialist in public administration. He cautioned that neutrality for us is a non-negotiable and highlighted the success of IAS can be assessed from the elections that we conduct. Mr. Quraishi concluded with India to continue the path of development, IAS will have a critical role to play.

7. Dr. Sanjeev Chopra began with bringing the focus on the constitution and the power that is bestowed with IAS comes from the constitution. But it is accompanied with a lot of responsibility. He pointed to the reality that the nation runs on the tripod of executive, judiciary, and legislature. The IAS are only a small part, and the relationship between the three pods is very contested sometimes. It is well documented that the resistance to decentralization comes from others. He also urged how the judiciary and legislature could perform better, to help the administrative services perform better.

8. Dr. Rajeev Dhawan, focused on the tripod is strong but if it does not coordinate it will fail. And interjected that Judiciary is the custodian of the constitution, the constitution belongs to the people of India and the nation, including the administrative services needs to hold up to it. Mr. Dhawan pointed to the fact that we have not invested in the human capital, without human capital we will not be able to implement the constitution. Then went on to point out that Sensitivity of the IAS to the people and to be imbibe the values of the constitution will be the key going forward. And concluded that as Ambedkar said, “if equality does not prevail, we will not be able to achieve constitutional aims we set for ourselves.”

9. Justice Madan Lokur, began with agreeing with the other speaker that we are on the march to greatness, and doing well. But still there is room for improvement. He pointed to the reality that the biggest litigant is the government and suggested that the executive needs to function well. He went to recognize that there are many cases where IAS officers have done fabulous work, where IAS has stood and delivered for the benefit of the people. He again shared that positive and collective action is critical. Then went on to conclude, that the constitution is a remarkable document, but we need people with character and integrity to implement the constitution. And ended with an exhort to “collectively work to make a better and stronger India.”
The discussion was well attended by over 150 participants who were ex-top IAS, young IAS officers, students, wide variety of civil society organizations in IIC.