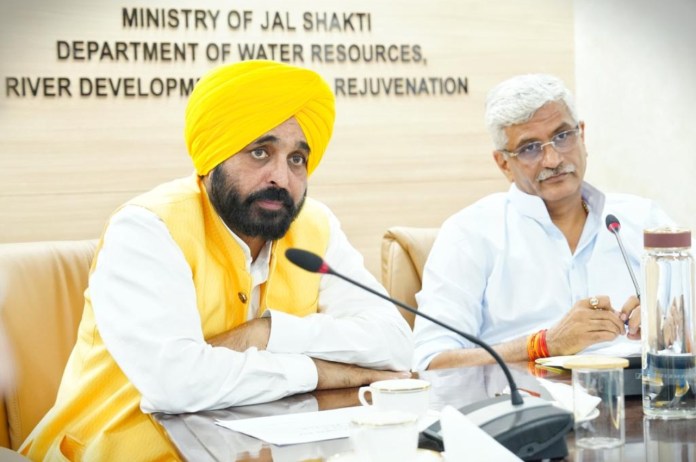 The Chief Minister, who called on Shekhawat at his office here today, underlined need for special package to strengthen and repair the existing canal system in the state. He said that Upper Bari Doab Canal (UBDC) that was constructed in pre independence era is in dire straits now due to which farmers are facing a lot of problems. Bhagwant Mann apprised the Union Minister that even the canals constructed after the independence needs to be strengthened and upgraded for which the Union government must allocate special package to the state.

The Chief Minister said that it is the need of hour as the food growers of the state, who have played a key role in making country self reliant in food production, have to face lot of problems due to dilapidated canal system in the state. He sought the kind intervention of Union Minister for clearing the proposals submitted by the state government in this regard. Bhagwant Mann said that it will help in enhancing the water carrying capacity of canals and benefit the farmers of the state.

The Chief Minister also apprised the Union Minister that the state government has started an ambitious project of cleaning of Buddha Nullah, a seasonal tributary of River Sutlej, which runs almost parallel to the river through Ludhiana district and ultimately merges with the River. He said that total length of Nullah for its entire stretch is 47.55 km out of which 14 Km passes through Ludhiana City and bisects it into two parts. Bhagwant Mann said that the state government has embarked a project worth Rs 850 crore for cleaning of this Nullah which includes construction of new STPs and CETPs besides upgradation of existing ones.

Meanwhile, the Union Minister assured Bhagwant Mann of fulsome support and cooperation. He said that the Union government will look into the demands of Punjab government sympathetically.

The Chief Minister was accompanied by his Additional Chief Secretary A Venuprasad, Special Principal Secretary Ravi Bhagat and others.