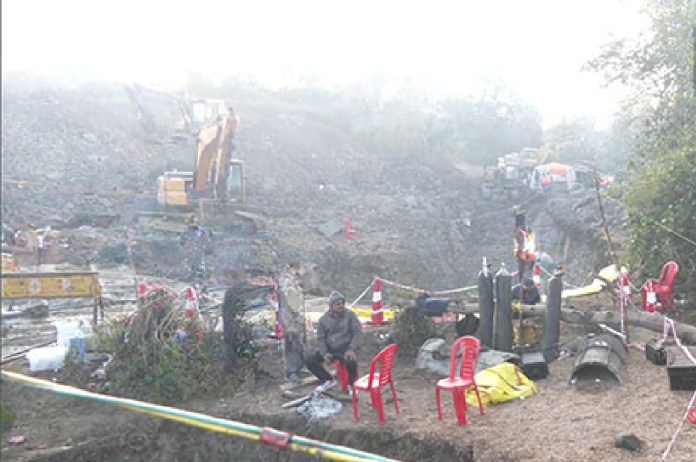 Betul (Madhya Pradesh): The rescue operation of an eight-year-old child who fell into a borewell in Mandavi here has crossed 65 hours on Friday. Upon seeing this, mother of the child has turned desperate, urging to rescue the child as soon as possible.

The deceased Tanmay’s mother, Jyoti Sahu said: “Give me my child, whatever it may be. Would it have taken so much time even if it was a child of a leader or an officer?”

“So much time has passed, and they are not saying anything. Not even allowing me to see.

“Three days have passed, citing two to four more hours. Tanmay fell on Tuesday and now it is Friday. I don’t want anything, take out my son. I want to see my child once, whatever it may be, just take him out,” the mother sounded desperate.

Other family members of Tanmay, who has been unresponsive since Thursday, also raised questions about the work of the administration. His schoolmates, meanwhile, have been chanting Gayatri Mantra for the well-being of their Class 3 student.

Providing an update, Betul Additional District Magistrate (ADM) Shyamendra Jaiswal said, “We have completed the digging to 45 feet and now will dig a horizontal tunnel which has been started.

There were hard rocks in the way which were broken with the help of machines.

“But now we have reached near the child and it is a very sensitive situation so now it will be dug manually and will try to reach near the boy.”

Tanmay fell into the borewell while playing in the farm around 5 pm on December 6 and the rescue operation started within the next hour.

His father, Sunil Sahu has said, “My 12-year-old daughter saw him falling into the borewell and informed me about the incident. We immediately rushed to the spot. He was breathing and we listened to his voice as we enquired. The rescue operation was started from 6 pm onwards on December 6.”

State Disaster Response Force (SDRF), Home Guard, and local police personnel have been at the job over the past three days.

Tanmay’s teacher, Geeta Mankar, said, “Tanmay is a student of Class 3. The children of his school, including teachers, chanted Gayatri Mantra for his safety. The teachers and students have prayed to God that Tanmay comes out safely from the borewell. Tanmay is an intelligent student. His safety will be the victory of all of us.”