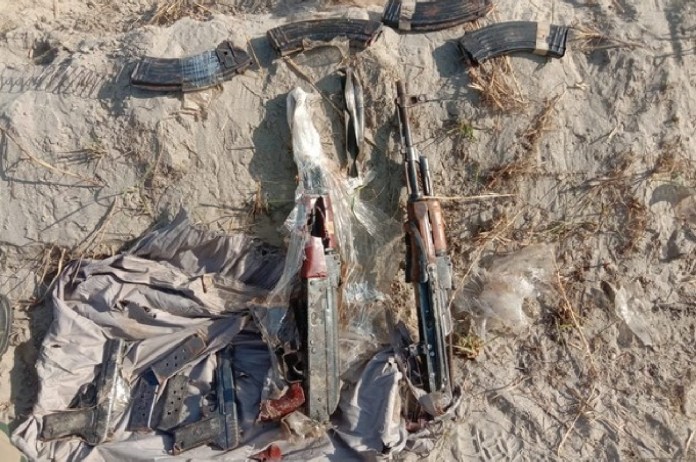 The border personnel on Sunday recovered illegal weapons in Ferozepur, another district bordering Pakistan, during a search operation.

“On December 11, 2022, at about 1215 hrs, Border Security Force troops while carrying out area domination patrolling ahead of border fence observed fresh dug soil and during a consequent search of the area, the party recovered weapon consignment near Village — Chandi Wala, District — Ferozepur,” an official statement said.

On Saturday morning, a low-intensity blast was reported at the Tarn Taran Police Sanjha Kendra in Punjab.

According to the police, the attack was carried out with a Rocket Propelled Granade (RPG). It added that a case was registered under the Unlawful Activities (Prevention) Act.

After receiving word of the attack, officials of the National Investigation Agency (NIA) arrived at the Sarhali Kalan police station in Tarn Taran on Saturday evening. The officias said they suspected a ‘terror link’ in the attack.

Also, on Saturday, Tarn Taran Senior Superintendent Of Police (SSP) Gurmeet Singh Chauhan told repporters that some suspects have already been questioned in connection with the incident.

After surveying the scene of the attack on Saturday, Punjab DGP Gaurav Yadav said, “An RPG hit the Police Subidha Centre. An FIR under UAP(A) has been registered.”
“A forensic team has also arrived at the spot. We are connecting all loose ends to reconstruct what happened,” he added.

He said that there is a clear indication of a strategy by “foreign elements to bleed India through thousand cuts”.

“We’ll investigate SFJ’s claim. We’ll investigate all angles and theories. Handlers and operators in Pakistan, elements they’re in touch within Europe, North America and their links are being probed so that real perpetrators are arrested soon,” he said.

He also appealed to the common people to not be afraid and cooperate with the police.