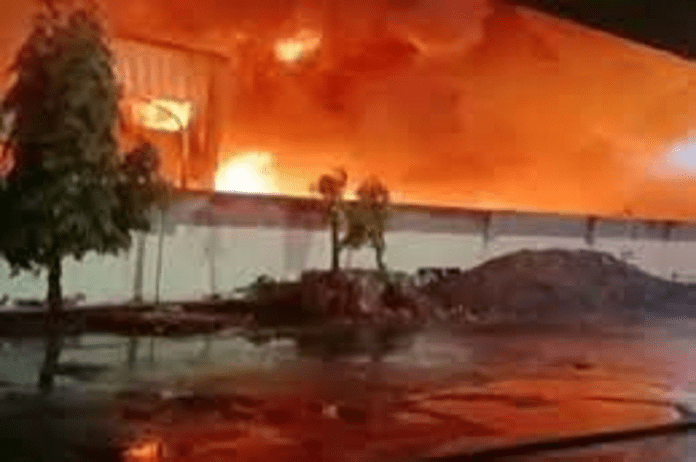 Gurugram: A massive fire broke out at an auto parts manufacturing factory in Gurugram in the early hours of Saturday, police said. The fire erupted in the Bilaspur Industrial area. On information, 24 fire tenders rushed to the spot.

Haryana | Fire breaks out in an auto parts manufacturing company in Bilaspur Industrial area, Gurugram. Fire tenders are present at the spot. pic.twitter.com/tj0NVMv4Lz

The major fire broke out around 4.30 am. Fire engines from IMT, Manesar, Sector 37, Sector 29 and Bhim Nagar stations have been rushed to the industrial area. A police team has also reached the spot.

As per latest reports, no casualty has been reported so far while the authorities have taken cognisance of the incident and trying to ascertain the cause of the fire.

Narendra Singh, Fire Officer, Gurugram informed that the fire has been brought under control. Over 12 fire tenders were engaged in the operation. He said, “We received the call about the fire at around 4.57 am today. Some drums filled with chemicals exploded. As of now, no casualty reported.”

The Delhi Fire Services has taken measures to ensure a trouble-free “festival of lights” as the national capital is gearings up to celebrate Diwali on October 24.

The fire department cleared that it was “fully prepared” to tackle any fire-related emergencies. It has cancelled the leaves of staffs as to deploy fire-fighting equipment at 30 spots across the city

In 2021, the department had received over 152 fire-related calls on Diwali despite a complete ban on crackers. Though the number was 25 per cent lower from 2020 and the lowest in 15 years, fire officials said.