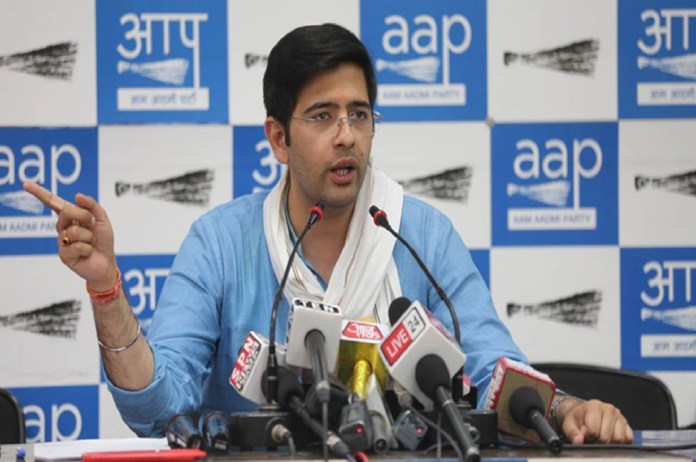 “That is, an election in which there was no need for campaigning, no advertisement, no need to sweat, no need to work hard day and night. Every time BJP used to win the elections just like that. But since the arrival of the Aam Aadmi Party and Arvind Kejriwal in Gujarat, the BJP’s shine is fading away, because of which the BJP has lost its sleep,” he added.

He continued, “Due to this, today BJP has to field the Prime Minister, the Home Minister and dozens of ministers of its Union Cabinet in the Gujarat elections. More than 10 of BJP’s Chief Ministers are campaigning in the Gujarat elections and along with that, more than 150 MPs, innumerable MLAs and innumerable ministers are putting in all they have got in the election campaign. And this is just the organization of the BJP, apart from this, their sister concern, they are all busy trying to stop the Aam Aadmi Party and Arvind Kejriwal by all means. Now BJP is so afraid of Arvind Kejriwal that it is using all its strength in the elections of Gujarat.”

He continued “A bag of milk used to cost ₹36 per liter and today the price of that ordinary milk bag has increased from ₹36 to ₹60 per liter. When a patient used to go to a private doctor for treatment, that doctor used to charge ₹300, today they are charging ₹800 per patient due to the double engine inflation of the government. CNG gas used to cost ₹40 per unit earlier and that CNG gas has increased to ₹75 per unit today. The big box of Sing oil used in every household of Gujarat used to cost ₹1,000 in 2014, today due to the double engine government, that ₹1,000 box of Sing oil now costs ₹2,800. This is double-triple inflation of a double engine government. Which the BJP people have brought on the heads of the people of Gujarat.”

He stated, “If the people of Gujarat today want to avoid this inflation then they have only one solution and that is Arvind Kejriwal, Aam Aadmi Party and Broom. On one hand there is double engine inflation of the government and on the other hand is Arvind Kejriwal’s gift of ₹30,000 every month to every Gujarati family. After the formation of the Aam Aadmi Party Government, from March 1, every family in Gujarat will get 300 units of electricity free per month, which means ₹4,000 per month will be saved. If there are two children in a family, they will be provided free world-class education in government schools, which means that each family will save ₹10,000 that they spend on education.”

He continued, “Apart from this, medicine, treatment, operation will all be free. Good locality clinics will be built, good government hospitals will be built, be it medicine for ₹100 or operation for ₹1,00,000, all the expenses will be borne by the Kejriwal Government of Gujarat. That is, ₹7000 spent on health services of every family will be saved every month. With this, if there are 2 unemployed youths in a family, then till the government does not provide employment to them, every unemployed person will be given an unemployment allowance of ₹3,000 per month. Which means there will be a benefit of ₹6,000 per family. Along with this, Arvind Kejriwal has decided to give a gift to women as well. ₹1,000 as an honorarium will be given to every woman for financial help to women. That is, if there are 3 women in the house, then each house will get a profit of ₹3,000. If we add all the gifts of the Aam Aadmi Party, then Arvind Kejriwal’s government is going to give a benefit of ₹30,000 per month to every Gujarati family.”

He then said, “On one side there is a government of double inflation of BJP’s double engine and on the other side there is a government of Arvind Kejriwal’s new engine with the benefits of ₹30,000. Today both these things are present in front of the people of Gujarat and the people have to decide. Today it is clearly visible in every survey of Gujarat that this time the election battle is between BJP and Aam Aadmi Party. Congress is not in the picture anywhere, because it is getting less than 5 seats. In the battle of Aam Aadmi Party vs BJP, Aam Aadmi Party seems to be coming ahead. Because old voters of Congress are inclined towards voting for Aam Aadmi Party and BJP voters and even BJP workers are also voting for Aam Aadmi Party this time. And such people, who have not made up their mind till the last week of elections, whom to vote for, have also decided after seeing the atmosphere that this time they have to vote for the Aam Aadmi Party only.”

He continued, “When our government was about to be formed in Punjab, people used to say that the Punjab Government has a debt of three lakh crores, so from where will you give free electricity? We started giving free electricity to the people of Punjab within 3 months of forming the government. In Delhi too, we have done the work of providing free electricity for 7 years. The meaning is clear that whether it is the Gujarat Government or any other government, there is no shortage of money in any government, there is only a shortage of good intentions among the leaders. Such a misconception is being created that the Aam Aadmi Party is distributing freebies, making people addicted to freebies. On this I would like to clearly say that there are two types of Revdi in front of the public. One is the Revdi of Aam Aadmi Party which Arvind Kejriwal gives, in which every family gets free electricity for respectable living, gets good education, gets good treatment and on the other hand there is BJP’s Revdi in which Chief Minister gets 5,000 units of free electricity, free air and train travel and MPs get houses and all facilities. Now the public has to decide whether they like BJP’s Revadi or Arvind Kejriwal’s Revadi.”

He added, “When Isudan Gadhvi will become the Chief Minister, whatever decision he will take, he will take it after talking to the public. Aam Aadmi Party believes that public decisions cannot be taken while sitting in AC rooms. For the decision of the people, they will have to go among the public and listen to them, their opinion will have to be taken and only after that a decision will be taken.”

He further said, “The Aam Aadmi Party believes that the Central and State Governments of the BJP have imposed so much tax on the people, that they pay tax on buying milk, on buying flour they pay GST, and on getting their haircut also they pay GST. Today there is nothing on which people do not pay tax. This tax is public money. So it is the responsibility of the government to return all this money to the public, through facilities, through good education and maybe the government should return this money to the public by bringing panchayat funds so that there is development of the public and the public gets all the basic facilities to live a respectable life.”

Calling out BJP for its misgovernance, Raghav Chadha said, “Unemployment in India is the highest in 40 years. Inflation is the highest in 35 years. Never before have we seen so much unemployment and so much inflation as we are seeing today in the BJP’s double engine government. The days of carpet-bombing and winning the elections even before the elections happen are gone and earlier you used to fight against the elderly Congress, now it was no match at all. Today, Arvind Kejriwal and the Aam Aadmi Party, along with the people of the country, have given a challenge to the BJP. We all are seeing the difficulties that BJP is facing and today in the festival of democracy, the people of Gujarat have a good option. We will not give a package of 30,000 crores like BJP because those 30,000 crores goes into the pockets of industrialists and contractors. We will give a direct benefit of ₹30,000 to every family.”

He concluded, “The amount of corruption that has happened in Gujarat in the last several decades has never happened before and we have seen the painful pictures of Morbi Bridge, it is an example of corruption. The contract of the bridge was given to a watch making company and two crore rupees were given to that company and they spent only 12 lakhs, the work which was to be completed in 6 months was half completed in 2 months and they opened the bridge for the public. There is corruption here and its money must have gone to the top. If the Aam Aadmi Party forms the government, we will investigate all this and we will catch all those who have played with the lives of the public and those who have done corruption and put them in jail.”