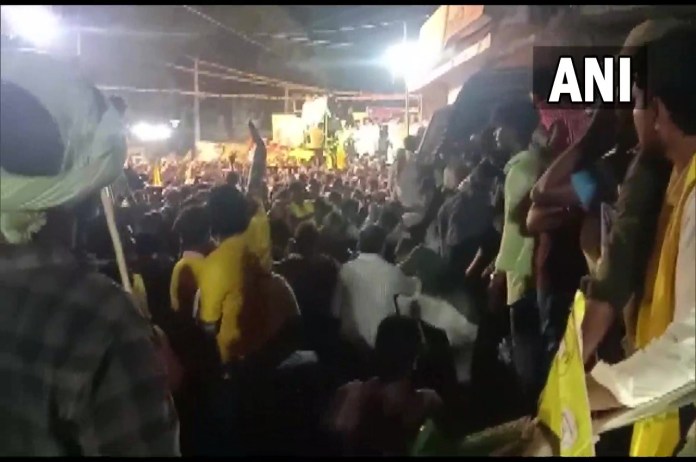 New Delhi: As many as seven people have died after a stampede occurred when Telugu Desam Party (TDP) president N Chandrababu Naidu arrived to address a public meeting at Kandukur in Nellore district of Andhra Pradesh Wednesday evening.

Seven people died, including a woman, and eight others were injured after they fell in a drainage canal in Kandukur town in Nellore district, police said.

Andhra Pradesh | Seven TDP workers lost their lives after a scuffle broke out between party workers during a public meeting being held by TDP leader N Chandrababu Naidu in Kandukuru of Nellore district today.

According to media reports, people had gathered in large numbers at the meeting venue for Leader of opposition N Chandrababu Naidu’s road show. Naidu was addressing the crowd when the mishap happened.

Nellore Police said that when Naidu arrived to address the massive public meeting, there was pushing and shoving among the crowd and some people jumped into a nearby drainage canal to escape. But as more people jumped on them to escape the stampede, at least seven persons died in the process, as reported by Indian Express.

Naidu cancelled his public meeting and roadshow and visited the local area hospital to express solidarity with the families of the victims and announced Rs 10 lakh as ex gratia to the kin of the each of the victims, the report said.

He has been on a political campaign against the YSRCP government in the state over the past few days, as part of his campaign in the run-up to the Assembly elections in 2024.