The Nihangs during the scuffle used swords to attack Harmanjeet while 5-6 onlookers were watching the fight. 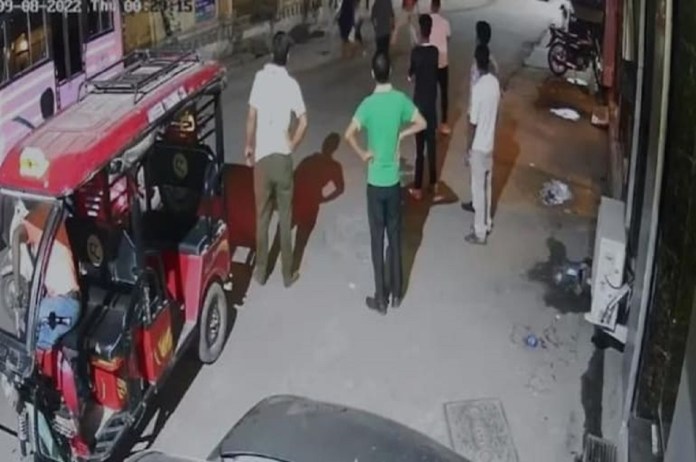 Amritsar: A youth was murdered by two Nihang Sikhs near golden temple on the intervening night of Wednesday and Thursday after a heated argument in Amritsar, police said.

The Nihangs had reportedly objected to the youth over consuming tobacco around the temple leading to the quarrel and eventually murder.

The crime was captured in the CCTV camera installed outside a hotel.

Police said that just after midnight when the Nihang Sikhs got into a quarrel with victim Harmanjeet Singh, a Chatiwind area resident, reported to be in his 20s.

A person who was killed by the Nihang Singh has gone viral on #SocialMedia. In reaction, @cpamritsar identified the individuals, one accused has been arrested, and raids are being carried out to apprehend the remaining suspects. #ActionAgainstCrime pic.twitter.com/QfPP8wu58m

The Nihangs had taken offence to the youth chewing tobacco and being drunk while roaming in that area,” Police Commissioner Arun Pal Singh told reporters. The incident happened some eight hundred meters away from the Golden Temple.

The Nihangs during the scuffle used swords to attack Harmanjeet while 5-6 onlookers were watching the fight.

An onlooker, Ramandeep Singh, working as a waiter in a nearby hotel had also joined the Nihangs and attacked the youth. While the two Nihangs managed to flee the place, Ramandeep has been arrested.

“It is shameful that while there were 6-7 people on the spot, none of them called us,” police said.

The police said that a preliminary probe revealed that the person who was killed was drinking alcohol.

Amritsar police said that the remaining two accused will be arrested at earliest.