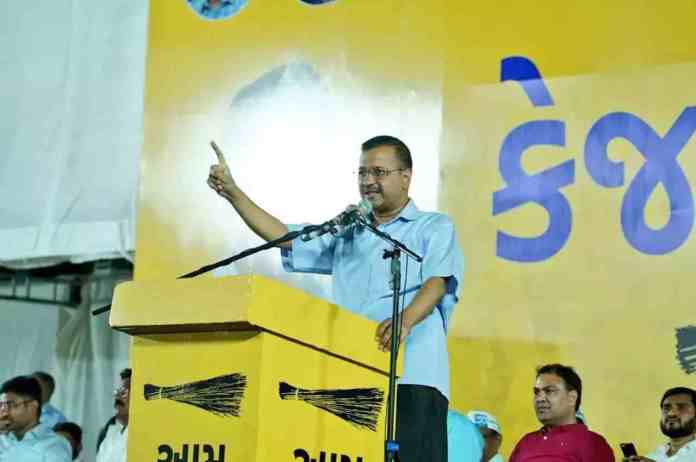 New Delhi: AAP National Convenor and Delhi Chief Minister Arvind Kejriwal announced his fifth guarantee to Gujarat. While addressing a town hall in Ahmedabad, he guaranteed that AAP’s Gujarat Government would pay Rs 1,000 to every woman above 18 years of age. Arvind Kejriwal states, “With Rs 1,000 coming to their pocket, daughters will be able to complete their studies by affording bus fare and fees, sisters will be able to buy fruits and milk for children even in inflation and mothers will not have to ask for money from husbands and sons to give shagun to their daughters. If money comes to the hands of a common woman, she will buy household items, this will increase the demand for goods and new factories will be set up to fulfill the demand. If more money goes into the pockets of the common man, the economy will grow more, if more money goes into the hands of the rich, the economy will be weaker. These people take GST from the public and spend all the money on their friends. We will stop corruption and run the government honestly. There is no shortage of money in the government, there is only a lack of intention, if a government with good intentions comes, everything will fall into place.”

AAP National Convenor and Delhi CM Arvind Kejriwal said, “Earlier, the people used to say that Gujarat was BJP’s fort and no other party has any chance of winning here. But as we are reaching out to people, we got to know that they have been fed up with the BJP. They were extremely terrified of the BJP and only now have gathered the courage to speak against them. They have come in front and it is clear that they want to see a change after 27 years of mal-administration of the BJP. They want to outroot BJP’s reign to install a new form of politics in Gujarat.”

He continued, “AAP is running a positive campaign in Gujarat for several months. We have laid out our blueprint if we will come to power. We will replicate all the wonders we have done in Delhi. We will fulfill our promises speedily like we are doing in Punjab. We don’t make false promises. We will build schools and hospitals. We will create jobs and give employment to the youth. We will supply electricity free of cost. We only talk about the issues which affect the people. BJP-Congress don’t do that. They only appear before the public to sling dirt and abuse each other. Public gets nothing out of it. They have an illicit setting. For the first time, the people have a realistic alternative in the form of AAP which they feel can solve their problems and bring progress in Gujarat.”

He added, “When we reached out to the people and interacted with them they said the electricity is extremely expensive in Gujarat. They find it impossible to pay their electricity bills due to skyrocketing inflation. Even small households with a single fan, tubelight, TV and fridge are getting a bill of Rs 5-10 thousands. They are finding it hard to keep their children fed because of hefty bills. Our first guarantee was designed keeping this issue in mind. Just like in Delhi and Punjab where we give free electricity to every family, we will supply electricity free of cost in Gujarat as well if we come to power. We will waive-off all the previous pending bills. We will provide electricity 24×7 and you will get zero bills. This is magic.”

AAP National Convenor said, “We gave our second guarantee by keeping in mind that the youth of Gujarat is unemployed and extremely stressed. If we form the government, we will provide jobs to every youth within five years and till the time they don’t get employment, we will provide an unemployment allowance of Rs 3 thousand per month. We will create 10 lakh government jobs and the entire plan for this objective is ready.”

“Next we met the traders and they told us that they live in fear of BJP because they continually threaten them and conduct raids on them. We will end Raid Raj. Nobody will be able to threaten them. We will give them the respect and dignity they deserve. They will be able to run their business as per their wishes. We had a positive interaction with the traders with respect to all the issues affecting them,” he added.

He continued, “Then, we reached out to Adivasi communities to talk about their issues. We already gave four guarantees. Today, it is time to give the fifth guarantee and it is for the women of Gujarat. When AAP will form the government in Gujarat, every female aged above 18 years will get Rs one thousand per year if they opt for it. Other political parties call it free ki rewari but we believe it is their right. It is their money which should get back to them. Taxpayers’ money should go to the public and not in Swiss Bank accounts. People might ask why we are giving Rs one thousand to the female. The reason is that I know a lot of college-going girls who are aged above 18 years. They are meritorious and have secured admission in a good college but their parents do not have the money for their family commutation to college. Sometimes, the parents do not have enough money to pay their college fees. This money will help them in continuing their studies. Also, there are a lot of married ladies who are finding it hard to run their house because the inflation is touching the sky. Family income is not increasing because the salary of their husband has stagnated but the expenses are ever increasing. This money will help them in giving nutritious diet to their children by buying fruits and milk. Our mothers want to help their daughters when they come home but they’re dependent on their sons or husbands. If they don’t give the money, the mothers cannot do anything and only tease remains. When she will have these thousand rupees, they will no longer need to look towards their son or husband. They will go inside, open their box and give the money to their daughters happily.”

Arvind Kejriwal said, “Giving Rs one thousand to every female will have a widespread impact on the economy as well. If you give money to the rich, they will buy aeroplanes or bungalows but that does not improve the condition of the economy but when you give money to a common female, she will go to market to buy groceries will result in expansion of the economy. There is an increase in production because of an increase in demand. More factories will be required to be established to meet this demand. More money you put in the pockets of the common man, the more the economy will grow. More money you put in the pockets of the rich, the more the economy will shrink. This is a thoroughly framed guarantee and those who oppose us should understand that crores of females and households will benefit from this move.”

He added, “Some people are concerned about the funds for such schemes. I want to give a small example. We promised that we will give free electricity in Punjab and people were puzzled how we would get the money? We came to power in March 2022 and within three months, we delivered what we promised. In April-June 2021, the previous government collected a tax of Rs 15 thousand crore. And during the same period in the next year, we collected Rs 21 thousand crore. The difference was that an honest government is now in power because of which an additional tax of Rs 6 thousand crore was collected. We only need Rs 3 thousand crore to provide free electricity for a year but instead, we collected double the amount.”

He continued, “I want to raise another issue. I received a letter from the daughter of a policeman in which she shared the pain of her father. I want to commend her for her courage to write a letter to me. I am also grateful for the trust she showed in me, instead of writing this letter to the CM of Gujarat or any other political party. We will do our best to uphold this trust. A lot of policemen have shared their problems with me personally. They cannot say this openly but they only have hopes from AAP. I want to request them to continue discharging their duty to the best of their capabilities. DOn’t put your job in jeopardy but keep supporting AAP in whatever way possible. Give your best to bring us in power and I assure you that we will hike your salary.”

CM Arvind Kejriwal concluded, “Today, the salary a newly recruited policeman gets upon entering the Police is a meagre Rs 20 thousand. It is very hard to run a household with this salary. Policemen of Gujarat get the lowest salary in the country and they are ones who are working in the most difficult circumstances. When we come to power, we will give the highest salary in the entire country to the policemen of Gujarat. We will also improve their working conditions. They are doing a great job but after the salary hike, we are confident that they will protect the people of Gujarat to the best of their capabilities.”

Colombo: Around thirty-two Sri Lankans are going abroad every hour to escape the country's...