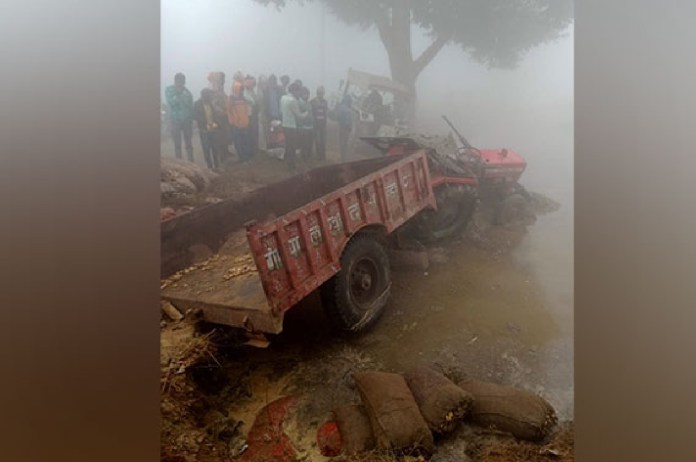 Mainpuri (Uttar Pradesh): As many as two people have died on Monday after a tractor-trolley overturned in Uttar Pradesh’s Mainpuri as the vehicle lost vision due to fog.

Mainpuri Superintendent of Police (SP) Kamlesh Dixit informed that the tractor-trolley collided with a railing less culvert due to reduced vision because of fog.

Two persons died as they came under the potato sacks. Their bodies were recovered with the help of locals. The incident took place in the Balarpur village under the police station limits of Bichhawan.

The tractor was heading towards Kurawali Mandi from the Bichhawan’s Bhojpur.
More details are awaited.

Meanwhile, at least three people were killed and 13 more were injured after two buses collided head-on at the Greater Noida Expressway. The District Magistrate of Noida, Suhas LY, informed ANI that 9 out of the 13 injured victims had been discharged from the hospital.

The state has been witnessing reduced temperature and dense fog in December.

A dense layer of fog also engulfed Moradabad this morning. As per India Meteorological Department (IMD), Moradabad experienced fog and mist in the morning and is likely to see mainly clear sky later in the day with the minimum temperature being 8 degrees Celsius.

The visibility was also reduced in Ghaziabad as a dense layer of fog covered the city this morning. As per IMD, Ghaziabad can also see mainly clear sky later today with the minimum temperature being 9 degrees Celsius.