India will not only be tech consumer, rather an active participant in developing it, says PM Modi 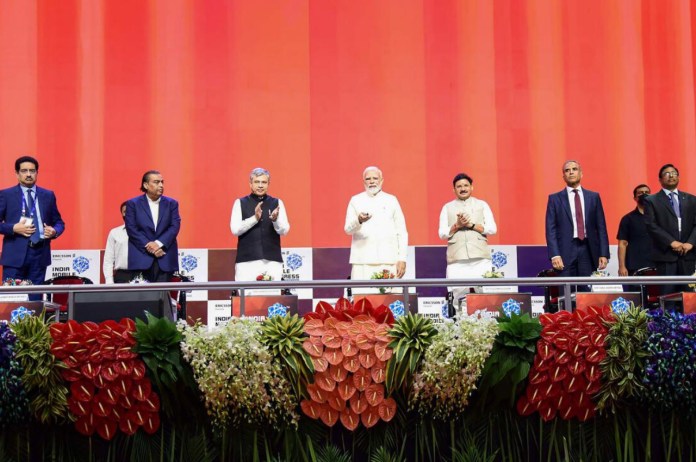 New Delhi: While introducing 5G services in the nation on October 1, Prime Minister Narendra Modi said that the technology will ensure that India would not only be a consumer of technology but also actively participate in its development and use.

Speaking at the sixth India Mobile Congress, Modi emphasised the inclusive character of 5G, which is projected to bridge the technological and economic gap between rural and urban India. He added that everyone is a stakeholder in the 5G experience, from rural peasants to labourers and the underprivileged.

According to him, technology may be used to diversify the financial system, increase productivity, and promote rapid social development. Speaking to an audience that included Mukesh Ambani of Reliance Jio, Sunil Bharti Mittal of Bharti Airtel, and Kumar Mangalam Birla of Vodafone Idea, Modi suggested that the MSME sector be given the chance to produce hardware parts for the telecom industry’s technological needs.

“The aim of digital India is to bring technologies to the people which both work with them, and for them. It is a holistic vision of development for the country,” Modi stressed. He pointed out that there were 60 million broadband internet users before 2014, which have now grown to more than 8 billion. The number of total internet connections has risen from just 20 million before 2014, to 850 million currently, with more connections in rural India, he added.

The prime minister stated that more than 170,000 gramme panchayats are now also connected with optical fibres as opposed to just 100 gramme panchayats before to 2014. Modi claimed that the government had chosen to concentrate on four pillars in regards to mobile phone production. He mentioned the cost of equipment, digital connectivity, data costs, and—most significantly—the idea of a digital first thought process.

Also Read: India leading ahead of US, UK in 5G adoption, says report

According to Modi, India currently has more than 200 mobile manufacturing facilities, up from just 2 before to 2014. “In terms of producing mobile phones, India is now ranked second. We used to import all of the mobile phones we needed, but now we export them”, he said.

5G services, according to telecom minister Ashwini Vaishnaw, will fundamentally alter a variety of industries, including banking, education, health, agriculture, and logistics. “Telecom is the backbone and entrance to Digital India. It serves as a platform for offering widespread digital services. As a result, the nation’s socioeconomic development requires a robust and healthy telecom sector, according to Vaishnaw.

Vaishnaw noted that through streamlining its procedures, the administration had successfully implemented structural transformation. A typical telecom permit used to take more than 300 days to obtain, but today it only takes less than seven days.