Maruti Jimny 5 Door vs Mahindra Thar: Maruti Suzuki has finally introduced its Jimny SUV in the Indian market. Made from Gujarat’s plant, it will be sold all over the world including India. Its most important thing is that it has been brought in 5 Door version.

Maruti has started booking its Jimny SUV and it will be launched soon in the Indian market. It is being seen directly against the Mahindra Thar. In the budget of 10 to 20 lakh rupees, Mahindra Thar has strengthened its hold among the customers. So let’s know which SUV looks heavier on whom in terms of dimensions, engine and other aspects.

In front of Mahindra Thar, Maruti Jimny remains a bit pale in terms of size. The Mahindra Thar 3 door version is also taller and wider than the 5 door Jimny. While the length of both is almost equal. Due to its 5-door, the wheelbase of the Jimny is 140 mm longer than that of the Thar.

In terms of ground clearance too, Mahindra Thar offers 16mm more. The water wading capacity of Jimny is 300 mm and that of Thar is 625 mm.Maruti Jimny vs Mahindra Thar.

Even in terms of engine, the Mahindra Thar beats the Jimny. Three engine options have been given in Thar, which include 1.5L diesel, 2.2L diesel and 2.0L petrol. It gets the facility of 4X4 and rear wheel drive (4X2). While the Jimny only gets 1.5 liters of petrol and only gets 4X4. 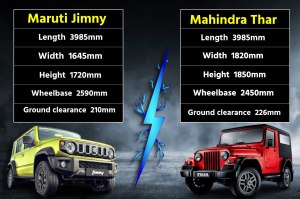 In this case the game will be

While the Thar will give you a strong and domineering feel, the Maruti Jimny is a cute off road car. Mahindra Thar price starts at Rs. 9.99 Lakh. The company has not yet announced the price of Maruti Jimny.

In such a situation, it is believed that Jimny will be brought at a very competitive price to compete with Thar. Moreover, the wheel size of the Maruti Jimny is also smaller than that of the Thar. That means it can be better than Thar in terms of mileage as well.