Apart from the obvious difference in electric and ICE performance, the XUV400 differentiates itself in areas such as length, exterior styling, interiors and equipment. Know: 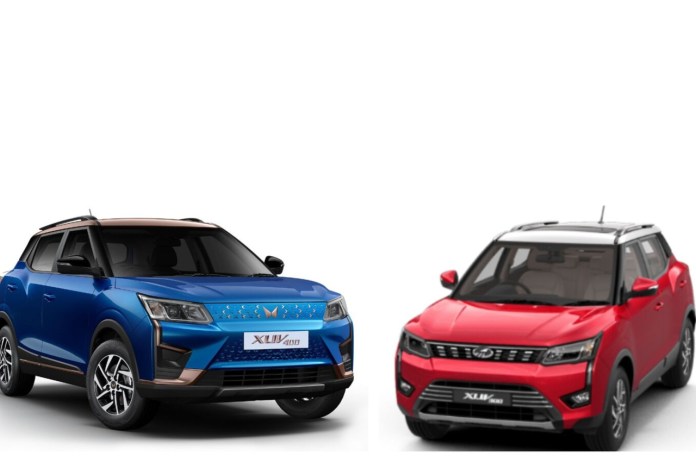 New Delhi: Mahindra recently unveiled its first EV SUV – the XUV400 – and it is slated to go on sale in January 2023. The XUV400 is based on the ICE-powered XUV300 compact SUV. Apart from the obvious difference in electric and ICE performance, the XUV400 differentiates itself in areas such as length, exterior styling, interiors and equipment.

We dive deeper into the details of both SUVs and try to understand what sets the XUV400 apart from its ICE counterpart.

Also Read :- How to charge your EV on long road trips? Know

Unlike the XUV300, which is a sub-4m SUV, the XUV400 is longer at 4.2m. The XUV300 is derived from the Ssangyong Tivoli, but has been scaled down to keep its length under 4m to take advantage of tax benefits.

However, there are no particular benefits for an EV under 4m, so Mahindra reverted to the 4.2m Tivoli for the XUV400. The 205mm longer length gives the XUV400 a larger boot space of 378 liters – a full 121 liters more than the XUV300.

The added length gives the XUV400 better proportions and a more balanced look. The EV also gets reprofiled rear doors, but the taillight assembly is similar to the XUV300. In addition, the XUV400 gets a different bumper design at the front, an X-pattern grille and generous copper accents, including Mahindra’s copper ‘Twin Peaks’ logo.

Mahindra says copper will be the signature color for their electric cars in the future. Also, while its headlamp unit is similar to the XUV300, the XUV400’s LED Daytime Running Lights (DRL) are limited to the main cluster only and do not extend into the bumper below.

While the basic interior layout remains the same, the XUV400 has an all-black interior compared to the beige and black XUV300.

The copper accents continue on the inside with details such as volume and climate control knobs, air vents and shifters and the Twin Peaks logo all in copper.

The interior of the XUV400 also adds subtle blue accents on the buttons and blue stitching on the seats – both absent from the XUV300. The instrument cluster is expectedly different from the XUV300 with EV-specific details, though it still remains analog.