Suzuki has showcased the newly updated Ertiga MPV in the Philippines. The refreshed Ertiga is similar to the one that went on sale in India in April. Know more: 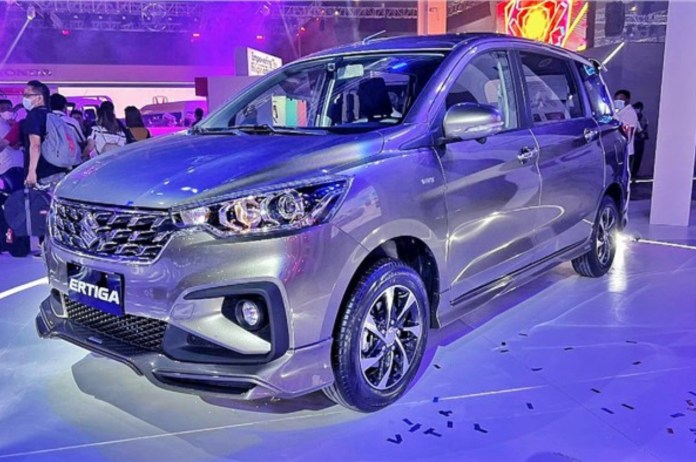 New Delhi: Suzuki has showcased the newly updated Ertiga MPV in the Philippines. The refreshed Ertiga is similar to the one that went on sale in India in April; and although the one sold in the Philippines is a product made in India, it has several differences and features.

Made in India Suzuki Ertiga: More features for export markets

Recently unveiled at the 2022 Philippine International Motor Show (PIMS), the facelifted Ertiga looks identical to the Indian model except for the left-hand drive setup, alloy wheel design and optional body kit. However, a closer look reveals that the car introduced in the Philippines will receive little extra equipment.

First, a larger 9-inch touchscreen and a 360-degree camera. While the touchscreen features are similar, the latter is a feature that is not currently available on the Ertiga in India. Another unique feature is the presence of an electrically operated tailgate, which is missing not only from the Indian model, but from most MPVs currently available.

While the 360-degree camera and large touchscreen are available on other Maruti Suzuki products in India, the addition of these features – along with a power tailgate – could add even more value to the hugely popular MPV.

One of the key reasons for not offering a 360-degree camera on the Ertiga in India could be the presence of the XL6, which comes with the feature and is sold as a premium MPV alternative through Maruti’s Nexa outlets. However, the XL6 does not come with a larger touchscreen or a power liftgate.

Made in India Suzuki Ertiga: K15B mild-hybrid instead of K15C

The Ertiga made in India for markets like the Philippines will certainly get more features, but it’s a step behind the one sold here in terms of powertrain options – Suzuki still provides the slightly older 1.5-litre K15B engine on the Ertiga to export markets.

This engine is mated to an older four-speed automatic transmission and comes with the mild-hybrid technology that came in the pre-facelift Ertiga in India.

In India, the Ertiga comes with a newer 1.5-litre K15C engine equipped with Dualjet technology mated to a five-speed manual or six-speed automatic and a mild-hybrid technology that Maruti calls ‘Smart Hybrid’.

The Ertiga is a highly sought-after model for Maruti in India and is facing stiff competition from the likes of the Kia Carens and both models have long waiting periods in most cities.

New Delhi: As many as seven people died and ten others injured after a...