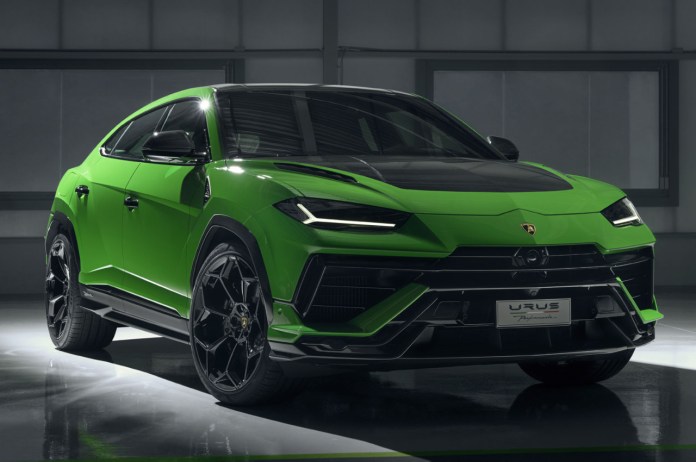 New Delhi: Lamborghini has unveiled the Urus Performante, its latest super-SUV, which is powered by the same 4.0-litre twin-turbocharged V8 but with 666bhp – 16bhp more than the outgoing Urus. However, the torque remained unchanged at 850 Nm. Prior to its launch, the Urus Performante set a record in the production SUV category at the Pikes Peak International Hill Climb.

It is priced at USD 2,60,000 (roughly Rs 2.07 billion). It is yet to launch in India. Lamborghini says deliveries of the Urus Performante will begin before the end of 2022.

The Urus Performante is now 47 kg lighter. Along with the increased power, the super-SUV can accelerate from 0 to 100 km/h in 3.3 seconds and reach a top speed of 306 km/h. Optionally, it also gets a version of the powerful Pirelli P Zero Trofeo R tires adapted for SUVs.

Lamborghini has also updated the driving modes on the Urus Performante, now getting a new Rally mode – focused on dirt roads – alongside the existing Strada, Sport and Corsa modes. Lamborghini mentions that this new mode has been tuned to have a bit of oversteer.

The Urus Performante now has a coil spring setup instead of the air springs that were present on the outgoing model. The new Urus is also 20mm lower, 16mm wider and 25mm longer than before.

A carbon fiber hood is now standard and gets bolder lines and two functional air vents. Partially exposed carbon fiber on the hood is available as an option, as is a carbon fiber roof. The front bumper on the Urus Performante has also been redesigned with new air vents to help cool the engine better.

In profile, the Urus Performante doesn’t get many changes apart from a new design for the optional 23-inch alloy wheels. At the rear, the new SUV has a refreshed bumper design and new air vents. It also has a new rear spoiler that Lamborghini says increases downforce by 38 percent.

The Urus Performante now has black Alcantara as standard on the inside – leather is optional – along with a new hexagonal seat design. Lamborghini also offers a Dark Package that adds a matte black finish to various accents throughout. The super-SUV also gets Performante badging on the seats, doors and roof lining.

The new Lamborghini super SUV will compete with the likes of the Audi RSQ8, Aston Martin DBX 707 and Porsche Cayenne Turbo GT. It will also compete with the upcoming Ferrari Purosangue SUV, which will debut next month.