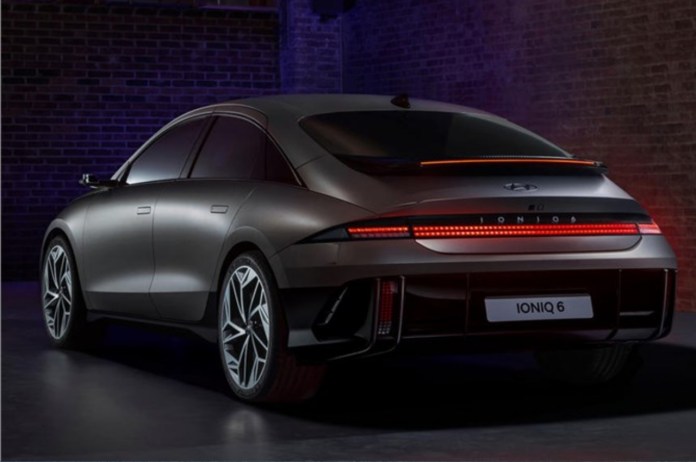 Apart from this, the next generation Verna sedan and the Creta facelift could also make their India debut at the 16th edition of the Indian Auto Expo. A new report has claimed that the company is also likely to showcase the recently introduced Ioniq 6 electric sedan at this auto event.

This car was first displayed in June 2022. The Ioniq 6 is the company’s third electric car, while the Kona EV and Ioniq 5 are already present. Hyundai Ioniq 6 is the second such product of the company which is based on E-GMP skateboard architecture.

The Hyundai Ioniq 6 electric sedan gets flush door handles and cameras in place of the traditional ORVMs. At the rear, the EV gets a ducktail rear spoiler, pixel-style LED taillights and a curved shoulder line.

Inside the cabin, the sedan gets a flat center console and dual 12-inch touchscreens for infotainment and driver display and a two-spoke steering wheel. The Ioniq 6 measures 4855mm in length, 1880mm in width and 1495mm in height and has a wheelbase of 2950mm.

How is the powertrain?

The new Hyundai Ioniq 6 will get two battery pack options of 53 kWh and 77 kWh. It gets a single motor RWD set-up as standard. While its dual motor setup produces 302 bhp power and 605 Nm torque, the RWD setup generates 228 bhp power and 350 Nm torque.

Read More  – HERO XPULSE 200T 4V LAUNCHED IN INDIA: ALL YOU NEED TO KNOW ABOUT

Will compete with Tesla Model 3

Tesla’s US-spec Model 3 is offered with three electric powertrain options, which include Standard Plus, Long Range and Performance.

The former gets a rear-wheel drivetrain and has a claimed range of 423 km, the Long Range and Performance variants come with a dual-motor all-wheel-drive setup and offer a range of 568 km and 507 km respectively .