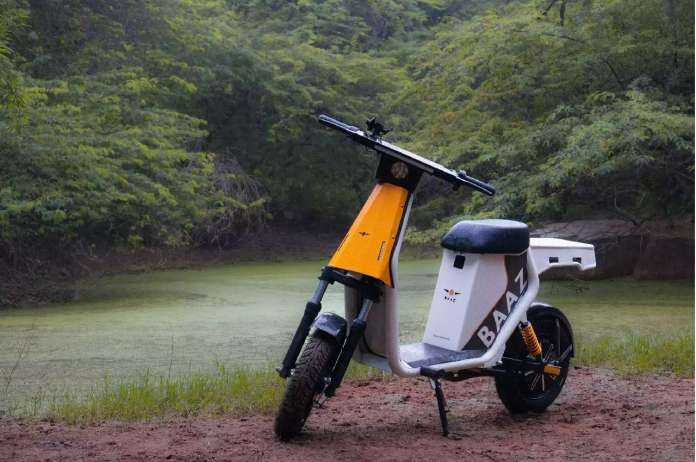 Baaz Electric Bike: An Indian startup, Baaz Bikes, has launched its first Made-in-India Electric Scooter. It has a swappable battery system, which may make some people think its price is a little high. At the Indian Institute of Technology in Delhi, the company has also introduced an automated battery swapping network and the Energy Pod (IIT Delhi).

In terms of the Energy Network, the machine in question was designed for fully automated operation.

The machine can operate in all types of extreme weather in India. It has an all-weather IP 65 rating, which means it can withstand rain and dust.

The e-scooter has a dual fork hydraulic suspension setup and dual shock absorbers at the rear, as well as a ‘Find my scooter’ button that allows you to locate the scooter in the parking lot.

Energy Pods, also known as Baaz batteries, are pods that contain a lithium-ion cell housed in an aluminium casing. It weighs 8.2 kg in total. It has an energy density of 1028 Wh. It is waterproof and splash proof, with an IP68 rating.

Baaz Bikes introduced its electric scooter in the country for Rs 35,000 (ex-showroom). The price may appear low at first glance because it excludes the cost of the battery.

The company claims that by detaching the battery, the price of the e-scooter has been significantly reduced, making it affordable for gig delivery riders.

According to Baaz, the company will work on a pay-as-you-move network swapping model that will further reduce daily costs for gig delivery riders.